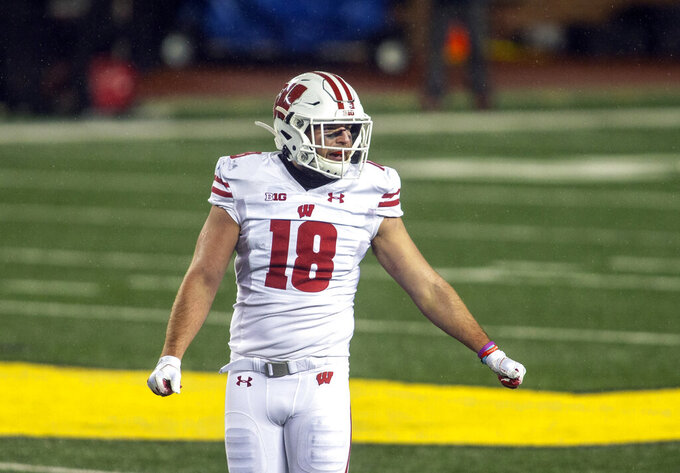 FILE - Wisconsin safety Collin Wilder (18) reacts after a play in the fourth quarter of an NCAA college football game against Michigan in Ann Arbor, Mich., in this Saturday, Nov. 14, 2020, filer photo. Wisconsin won 49-11. “Coach Leonhard had a great quote one time,” safety Collin Wilder said. “It’s like the beauty of football is you never get there. There’s always something to work on. There’s always something to improve on.” That improvement could start by making more game-changing plays. That’s something the Badgers have emphasized during their spring practice sessions that end this week.(AP Photo/Tony Ding, File)

Wisconsin’s defensive players believe they still have plenty of room for improvement after a season in which they gave up fewer yards and points per game than nearly every other team in the nation.

The Badgers point that out by referring to a message from Jim Leonhard, their highly regarded defensive coordinator.

That improvement could start by making more game-changing plays. That’s something the Badgers have emphasized during their spring practice sessions that will continue through Friday.

“To me it’s finding ways to create vision on the quarterback to hopefully make those turnovers become reality week in and week out at times,” Leonhard said. “Or in crucial situations, when we need a big sack, when we need a big TFL (tackle for loss), what are the top ways to get there? That’s what I’m trying to identify in the spring.”

Wisconsin has finished in the top five in total defense and top 10 in scoring defense in three of Leonhard’s four seasons as defensive coordinator. That trend continued last year even as the Badgers struggled to finish above .500.

Wisconsin went 4-3 in a pandemic-delayed season despite ranking fifth in total defense (299.9) and tying for ninth in scoring defense (17.4).

“The numbers look good when you talk about overall defense and the stats,” Wilder said. “But at the end of the day, we’ve got to take the ball away, and I don’t think we did a great job of that, including myself.”

Wisconsin forced just eight turnovers in six regular-season games last year. That’s a discouragingly low figure for a program that led the Big Ten in total takeaways in 2016 and 2017.

The Badgers closed the 2020 season by picking off four passes in a Duke’s Mayo Bowl victory over Wake Forest. They need those kinds of performances to happen more often this fall as they attempt to reach a more prestigious postseason destination.

“What we did in the Mayo Bowl is what I wanted us to do all year, and we didn’t necessarily do that, especially when we needed it the most in the big games,” Wilder said. “That’s the biggest thing that we need to improve on as a defense, is just taking the ball away.”

Those aren’t the only types of big plays Wisconsin’s defense needs to produce more often.

“I feel like last year the pass rush for our defense as a whole wasn’t really what Wisconsin is about,” outside linebacker Nick Herbig said.

Wisconsin will try to improve that sack total while attempting to replace departed defensive ends Isaiahh Loudermilk and Garrett Rand. The only returning Badger who recorded more than one sack last season is linebacker Leo Chenal, who had three.

The Badgers also have a new defensive line coach in Ross Kolodziej, the former Badgers strength coach who took this new role after Inoke Breckterfield left to coach Vanderbilt’s defensive line. The other change on the staff is the addition of cornerbacks coach Hank Poteat.

Those Badgers are working to become more dynamic this season. For instance, Sanborn has looked back at what he did last season and seen examples of plays he could have made if he’d gotten a better break or if he’d been more effective at seeing what was coming.

“I think that’s an area where I need to get better to help our defense even more and make those game-changing plays that help everyone,” Sanborn said.

They know what they accomplished last year. They believe they’re capable of doing more.

“You never want to think you’ve reached your ceiling,” Chenal said. “And I definitely know I haven’t.”