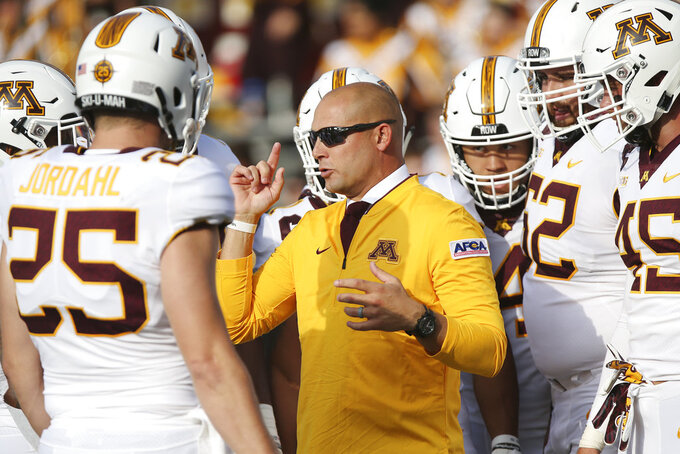 MINNEAPOLIS (AP) — After watching long gain after long gain by Illinois last weekend, Minnesota coach P.J. Fleck knew a change had to be made to his defense.

Each of the first two drives by the Illini ended with a 72-yard touchdown run. By the end of Saturday's 55-31 loss , the Gophers had allowed 646 yards of offense, including 430 rushing yards, and five touchdowns that covered at least 30 yards. By the end of Sunday, Fleck had fired defensive coordinator Robb Smith.

Defensive line coach Joe Rossi was elevated to interim defensive coordinator, with Minnesota (4-5, 1-5 Big Ten) preparing to host Purdue (5-4, 4-2) this week. Rossi assumed command of a defense allowing an average of 43.2 points per game in conference play, along with 507.7 yards per game.

The breakdowns against Illinois were just a continuation of a troubling trend. Star safety Antoine Winfield Jr. injured his foot in the Big Ten opener at Maryland, when the Terrapins rushed for 315 yards amid a slew of missed tackles by the Gophers.

Ohio State passed for 412 yards against Minnesota. Nebraska and Illinois each scored at least 53 points and tallied at least 646 yards of offense. The Gophers also own the conference's worst turnover margin at minus-8.

"There was a big difference between the beginning of the year, end of the year, for a lot of different reasons," Fleck said. "It was a very inconsistent, rollercoaster-type ride. Again, there's a lot of blame to go around, a lot of areas. Again, that starts with me."

The 39-year-old Rossi was the defensive coordinator at Rutgers for two seasons before being hired by Fleck in 2017 to be Minnesota's quality control coach. He took over as the defensive line coach this year.

"It's the explosive plays and the turnovers," Fleck said. "We have to get way more takeaways and we have to eliminate the explosive plays. I think that's what I want it to look like as we keep going forward and keep getting better. That's what we've talked about since day one we've gotten here. That's how you win ballgames."

Up next is a Purdue squad that owns the Big Ten's second-best scoring offense at 35.8 points per game in conference games. The Boilermakers are second in the league in total offense, averaging 485.2 yards per game. They've beaten then-No. 2 Ohio State and then-No. 19 Iowa in two of their past three games, with a loss at Michigan State in between.

Fleck's message to Rossi was to get the Gophers to play fast.

"I want them having confidence when they step on the field Saturday, playing fast, knowing exactly where they need to be," Fleck said. "I know that's our conversation. He's a really special coach. He's going to do a great job."