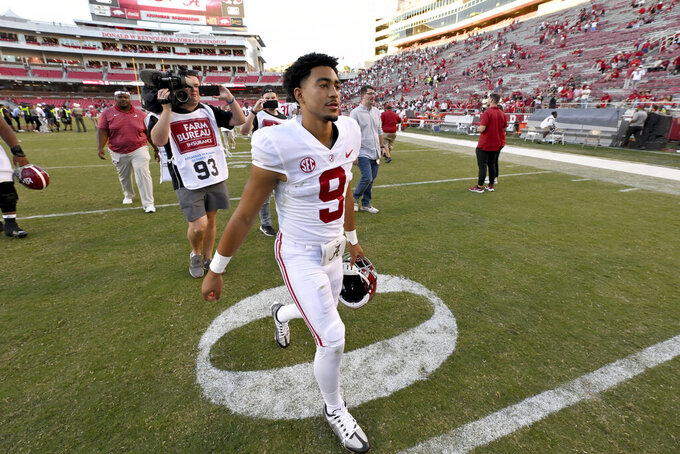 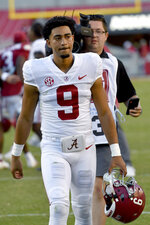 FAYETTEVILLE, Ark. (AP) — Alabama quarterback Bryce Young suffered an AC joint injury in his shoulder and left No. 2 Alabama's 49-26 win over No. 20 Arkansas in the second quarter Saturday.

The Heisman Trophy winner came off the field after Alabama's fifth drive ended at its own 42, favoring his right arm and holding it close to his body after attempting a pass that went incomplete. The injury appeared to happen on the drive before after he was sacked by Arkansas linebacker Drew Sanders.

“Bryce has a little AC sprain in his shoulder. I think he’s OK. He doesn’t have a serious injury,” Saban said. “We didn’t think it was. He couldn't go back in the game today because I didn’t think he had much steam throwing the ball.”

Alabama hosts Texas A&M in its next game October 8. The Aggies were the only team to beat Alabama in the regular season last year as Young led the Crimson Tide to the national championship game against Georgia. Saban felt positive about his quarterback's recovery time.

“He’s had these before and in a few days he’s responded really well,” Saban said. “We’ll just have to see how it goes.”

With Alabama up 28-7, Young returned to the sideline after halftime in full uniform. He did not re-enter the game on Alabama’s first second-half possession. He had thrown for 173 yards with a touchdown and an interception when he left with 10:42 remaining in the first half.

Redshirt freshman Jalen Milroe replaced Young and led Alabama to five more touchdowns. Milroe was only 4 of 9 passing for 65 yards and a touchdown, but added 94 yards rushing and another score.