Altered practices due to virus could lead to sloppy games 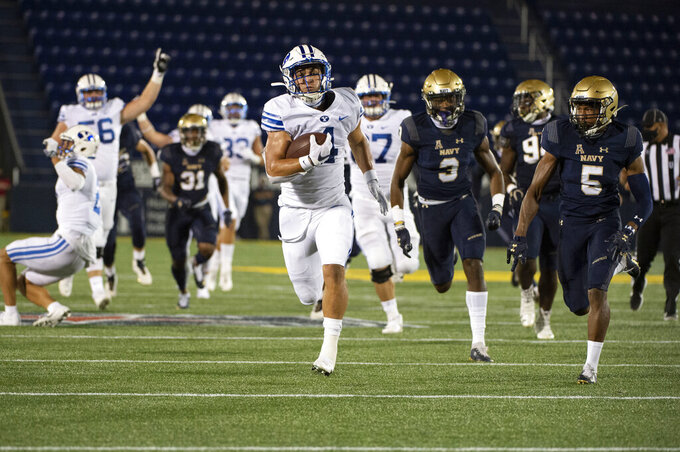 FILE - In this Monday, Sept. 7, 2020 file photo, BYU running back Lopini Katoa runs for a touchdown as Navy cornerback Michael McMorris (5) and defensive back Cameron Kinley (3) chases during the first half of an NCAA college football game in Annapolis, Md. (AP Photo/Tommy Gilligan, File)

The coronavirus pandemic wiped out most spring practices and disrupted the rhythm of college football's preseason, with player quarantines, uncertainty about playing games — or both.

It also prompted some coaches to make a decision about how much live blocking and tackling there would be in practices. There was a balance to strike, especially when the date of the first game was a moving target. Mitigating players' risk of infection was always in the back of coaches' minds.

West Virginia's Neal Brown said his concerns were preparing offensive linemen to move opponents off the line of scrimmage and defenders to tackle in open space.

“And that's still my concern," he said, "maybe more so after watching some of the games.”

BYU coach Kalani Sitake put his team through three full-contact scrimmages and other full-pad drills. Navy coach Ken Niumatalolo, wanting to protect his team from COVID-19, had his players hit tackling dummies and blocking bags instead of each other.

According to Pro Football Focus, 172 of BYU’s 301 yards rushing came after contact and 161 of its 279 yards passing came after the catch. PFF counted 14 missed tackles by Navy.

Niumatalolo expressed regret minutes after the game for not allowing live hitting in practice. He told reporters Wednesday he would return to the normal practice regimen.

“Touch football is over,” he said.

North Carolina's Mack Brown said coaches were in a tough position a month ago because it wasn't certain there would be a season.

Clawson said he wasn't optimistic there would even be a season until two or three weeks ago.

“I didn’t feel it was right to have our players tackle and go to the ground where there’s a higher risk of injury until I knew with greater certainty that we were going to play,” Clawson said.

Wake Forest usually has two or three scrimmages but this year had “one and a half,” he said.

“We have tackled, but not nearly as much as we usually do," Clawson said. "And I have no regrets doing that, regardless of what happens on Saturday. To me, it was the responsible thing to do."

Army had its usual number of full-contact practices in the preseason — “business as usual,” coach Jeff Monken said — and was sharp in a 42-0 win over Middle Tennessee.

Monken said Army's setup in West Point, New York, alleviated some of the worries about coronavirus transmission. He pointed out all players and coaches live on campus, and goods and services are readily available, making it a quasi-bubble.

Monken said he and his staff needed to evaluate young players, and that couldn't be done adequately without live hitting. He said all the usual coronavirus precautions were taken.

Practices proceeded normally at Clemson. Tigers coach Dabo Swinney said more conditioning work was done early because the pandemic pushed back the start of the season, but when it was time for contact, there was contact.

“As far as how we practice, how we prepare," Swinney said, "nothing changed in that regard.”