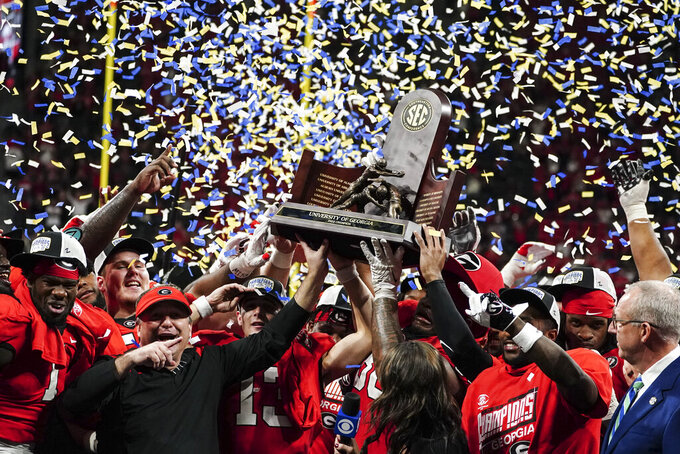 Georgia, Michigan, TCU and Ohio State were the top four in the final Associated Press college football poll of the regular season.

The Bulldogs (13-0) are No. 1 for the ninth straight week and 12th time this season in the AP Top 25 presented by Regions Bank. Georgia received 62 first-place votes and Michigan (13-0) received the other one in the poll released Sunday.

T he final College Football Playoff rankings to set the four-team field for the national championship tournament was scheduled to be released later Sunday.

TCU (12-1) remained third, despite losing for the first time this season in the Big 12 title game on Saturday. The Horned Frogs lost in overtime to Kanas State.

The Buckeyes moved up a spot to No. 4, ahead of Alabama and Tennessee.

Utah was No. 7 after beating Southern California in the Pac-12 championship game. The Trojans slipped four spots to No. 8.

Penn State was ninth and Clemson stayed at No. 10 after winning the Atlantic Coast Conference title.

Tulane reached a season-high 14th after winning the American Athletic Conference and Troy made its season debut at No. 23.

By John Zenor 3 minutes ago
By Pete Iacobelli 2 hrs ago
2 hrs ago
By Ralph D. Russo 6 hrs ago
By Ken Powtak 19 hrs ago