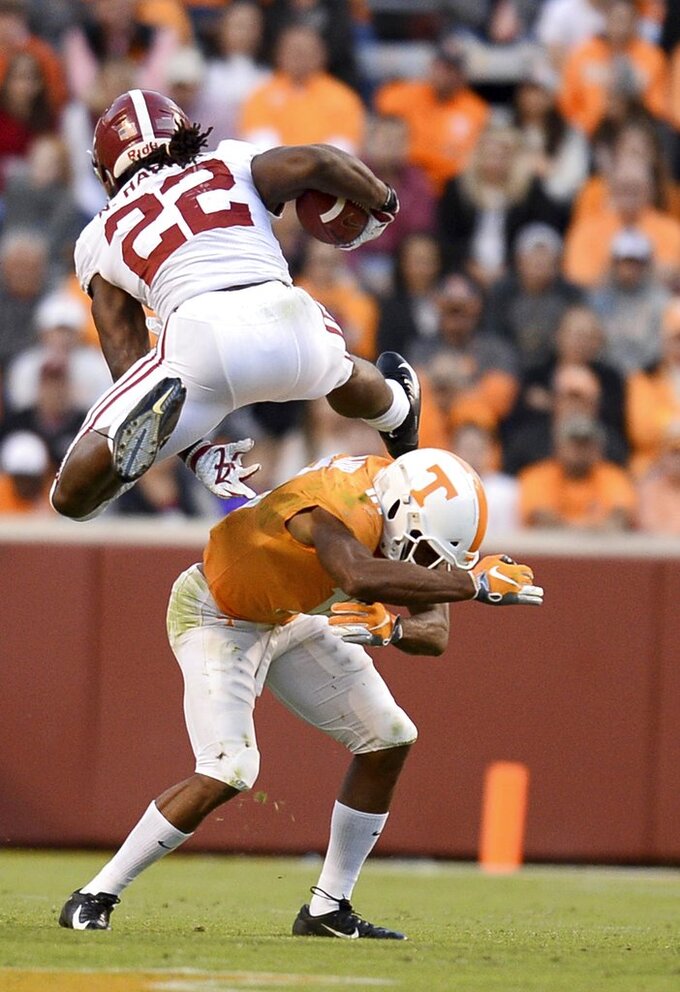 Alabama running back Najee Harris (22) hurtles over Tennessee defensive back Nigel Warrior (18) as he runs toward the end zone during the second half of an NCAA college football game Saturday, Oct. 20, 2018, in Knoxville, Tenn. Alabama won 58-21. (Joy Kimbrough /The Daily Times via AP)

Alabama is finally a unanimous No. 1 in The Associated Press college football.

That probably took longer than it should have, but now all 61 voters are on board. Being unanimous No. 1 is notable but not rare. The Crimson Tide did it a couple times last season and four times in 2016.

The one thing holding back, if you will, the Crimson Tide was a few voters who were less than impressed with Alabama's schedule — which has some fans apoplectic, but really hasn't been all that better relative to other top teams.

Of course, you don't get anything special for being unanimous No. 1. A team is No. 1 or it isn't. Being unanimous doesn't make it No. 1est.

The latest poll also restored Clemson at No. 2, thanks in part to then-No. 2 Ohio State going down, a week after Georgia was No. 2 and lost. Heat check was calling for this move last week. How did the voters do with the rest of the rankings?

The Tide has scored a touchdown on each of its opening drives this season. Those drives have averaged 4½ plays.

North Carolina State challenged freshman quarterback Trevor Lawrence to beat it with the pass. Lawrence did just that as coach Dabo Swinney did not hesitate to put the game on his young QB.

Next: vs. Navy at San Diego.

The Fighting Irish prepare for the first of two West Coast trips in the final five games.

The Tigers are 124th in the country in converting red-zone opportunities into touchdowns at 47.37 percent (18 for 38).

The last two starting quarterbacks to face the Wolverines' defense are 12 for 45 for 166 yards and one touchdown.

The Longhorns' offensive line was one of 14 to make the midseason honor roll for the Joe Moore Award, given to the country's best offensive line. That's a big improvement for a group that was a major question mark coming into the season.

Next: vs. No. 9 Florida at Jacksonville, Florida.

Will be interesting to see how QB Jake Fromm rebounds for a poor outing against LSU, and whether freshman Justin Fields gets some opportunities if Fromm doesn't.

The Sooners' running game has been just fine since TB Rodney Anderson was lost to a knee injury, including a breakout game from redshirt freshman Kennedy Brooks against TCU.

Next: vs. No. 7 Georgia at Jacksonville, Florida.

The Gators' defense has faced only 14 red-zone possessions, fewest in the SEC.

The Knights gave QB McKenzie Milton a day off against East Carolina so he should have plenty of time to rest a sore ankle before a big AAC East game against Temple.

Spectacular failures have become rather common for the Buckeyes in recent years, but it's important to keep in mind: Ohio State is likely to make the College Football Playoff if it can win out.

The Wildcats are the closest thing the SEC has to a service academy: They passed for 18 yards against Vanderbilt and are the only team in the conference averaging less than 20 passes per game (19.6).

Next: vs. Baylor, Thursday.

The Mountaineers are tied with Oklahoma in the Big 12 for the best touchdown percentage on red-zone trips at 75 percent (18 for 24).

The Cougars are now the Pac-12's best playoff hope — which is not good at all for the Pac-12.

The Pac-12 North race is muddled with Stanford, Oregon, Washington and Washington State still very much in it. The Huskies look like the best of the bunch.

Next: at Mississippi State

It was usually right around this part of the season when things went bad for A&M under Kevin Sumlin. Let's see how Jimbo Fisher's Aggies handle the stretch run.

QB Trace McSorley had his streak of games with a touchdown pass snapped at 34, but he has already set a career high for yards rushing with 554.

Heat check: A touch too hot.

The Hawkeyes have won three straight Big Ten games by at least 15 points for the first time since 2005.

The schedule sets up for a strong finish, conducive for nine, maybe even 10 victories. Can the Ducks take advantage?

Badgers star Jonathan Taylor is the busiest back in the nation, averaging 24.29 carries per game.

The Bulls are unbeaten and you can't take that away from them, but they haven't been overly impressive against their weak schedule.

OK, so the Wolfpack is nowhere near elite, but a 10-win season is very much in play.

Next: at UCLA, Friday.

The Utes have scored at least 40 points in three straight games, and are the only thing resembling a really good team in the Pac-12 South.

This Stanford team is nothing like what we have become accustomed to under David Shaw, with no running game (3.07 yards per carry, last in the Pac-12) and not much defense (5.63 yards per play, 10th in the Pac-12).

Next: at Georgia Southern, Thursday.

Heat check has been touting the Mountaineers for a few weeks and now they are ranked for the first time in program history.

Should be out: South Florida and Stanford. Should be in: Purdue and Fresno State.