AP Top 25 Reality Check: Welcome, back 'Clones; Who's next? 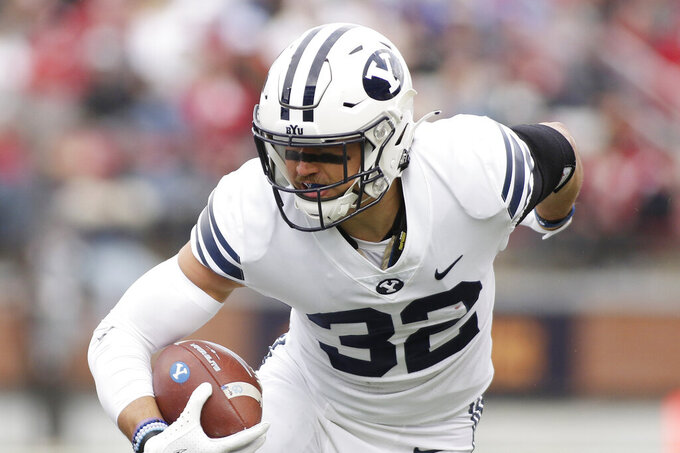 For the first time this regular season, there were no teams making their season debut in The Associated college football poll.

Iowa State and BYU rejoined the AP Top 25 presented by Regions Bank, but the number of teams that have been ranked for at least one week this season remains at 44.

Iowa State is back after four weeks out. The Cyclones were preseason No. 7, but two September losses sent them tumbling.

There are currently 13 unranked teams that started the season ranked.

Most notably, Clemson, which was No. 3 in the preseason poll and is now sitting at 4-3. It is looking more and more as if the Tigers will have a hard time salvaging this season as injuries mount and the offense remains a mess.

The schedule sets up so Clemson could go on a run against a remaining schedule with three losing teams, plus Louisville and No. 13 Wake Forest.

Among the unlucky 13, Louisiana-Lafayette (preseason 23, 6-1) and Arizona State (preseason 25, 5-2) look like the best bets to get back to where they started.

Reality Check might even argue the Ragin' Cajuns should be ranked now.

Next: vs. Florida, Saturday.

Reality check: The crazy good defensive stats the Bulldogs have been putting up will presumably inflate in the next few weeks by some competent offenses (Florida, Missouri, Tennessee). Just how how much? We'll see.

Next: at Tulane, Saturday.

Reality check: Close games should not count as losses for the Bearcats.

Ranked: Still, fine but holding off the teams behind them will be hard through no fault of their own.

Reality check: Alabama was a little sloppy against the Vols. But as Texas A&M gets it together, Alabama's lone loss doesn't look bad at all. Be careful calling Alabama vulnerable against any opponent but Georgia.

Reality check: Sooners have been getting hammered by skeptics for some close victories, but this is the first time Oklahoma has been 8-0 since 2004. Just win, baby!

Reality check: Buckeyes' offense has been silly good lately (16 touchdowns and two field goals on the last 18 first-half drives, not including ones in which the clock ran out). It is fair to tap the brakes just a bit considering the surge has come against Rutgers, Maryland and Indiana.

Ranked: Still, too high but it's getting harder to make that case.

Next: at No. 8 Michigan State, Saturday.

Reality check: Among ranked teams, only Coastal Carolina (163) has attempted fewer passes than Michigan's 166. Georgia, by the way, has thrown 167.

Next: vs. Colorado, Saturday.

Reality check: Becoming difficult to stand by the Ducks, but having Oregon behind the Buckeyes still seems unfair.

Reality check: Spartans DE Jacub Panasiuk gets overshadowed by Michigan's Aidan Hutchinson, but has played like an All-American, too.

Reality check: Only four quarterbacks have more rushing attempts than Matt Corral's 100. Yes, 30 came in one game against Tennessee, but he has been in double-digits all but once.

Next: vs. North Carolina, Saturday.

Reality check: The gaudy stats haven’t been there for RB Kyren Williams (4.20 yards per carry), but there is no doubt he is the Irish’s most valuable offensive player.

Reality check: Wildcats begin pursuit of a New Year's Six bowl against remaining opponents that are a combined 18-23.

Next: vs. Duke, Saturday.

Reality check: Hartman for Heisman? It's catchy and QB Sam Hartman's numbers (9.7 yards per attempt and a 173.63 efficiency rating) match up well with the other contenders.

Reality check: The round-robin between the Aggies, Ole Miss and Auburn over the next three weeks should be a lot of fun. Can A&M rely on that run-heavy offensive approach against the Rebels and Tigers?

Reality check: Cowboys have most of the toughest part of the Big 12 behind them. Except for Bedlam against Oklahoma. That rarely goes well, but if they can get there without another loss the conference title game could be a possibility no matter how it goes.

Reality check: Home games with Texas and Oklahoma over the next three weeks will determine just how high the ceiling is for the surprising Bears.

Next: vs, Miami, Saturday.

Reality check: Panthers are the only team that ranks in the top five of the ACC in both offense (third at 6.64 yards per play) and defense (fourth at 4.98). They're no fluke.

Reality check: QB Bo Nix has taken a step forward this season, but hasn't gotten much help from a receiver group that lacks a true No. 1.

Next: vs. Houston, Saturday.

Reality check: WR Reggie Roberson Jr. is having a strong comeback season from a knee injury, with 30 catches for 406 yard and five touchdowns.

Reality check: Running the ball and stopping the run have been an issue all season and they finally conspired to derail a promising season.

Ranked: Should probably still be ahead of Auburn. At least for another week.

Next: vs. Fresno State, Saturday.

Reality check: Punting is winning: Matt Araiza, a midseason All-American, has an 80-plus yard punt in each of the last two games.

Reality check: DE Will McDonald IV is the Cyclones' Kayvon Thibodeaux with 7 1/2 sacks that always seem to come in big spots.

Reality check: Roadrunners are picking up steam, beating their last two opponents by a combined 90-16.

Next: vs. Troy, Thursday.

Reality check: The offense is still a lot of fun, and probably good enough to roll through the rest of the regular season without a loss.

Reality check: Cougars' bend-but-don't-break defense will be tested next week by the potent Cavaliers and QB Brennan Armstrong.