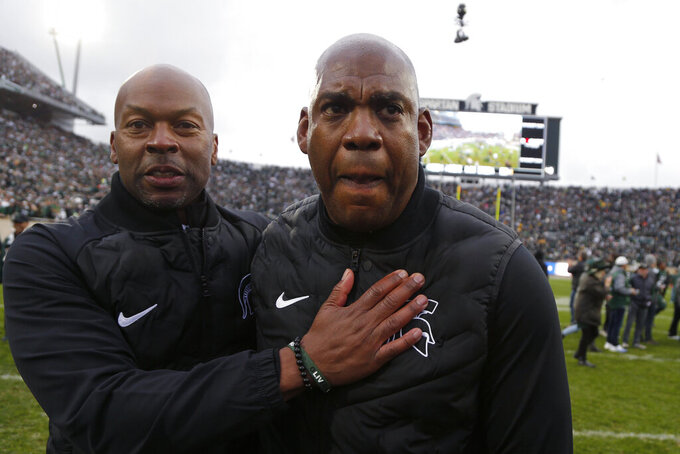 Now it's time to talk about Jim Harbaugh.

There has not been much discussion about college football's most scrutinized coach as Michigan ran out to a 7-0 start.

With Harbaugh, the failures are all that seem to matter.

After No. 8 Michigan State came from 16 down in the second half to beat No. 6 Michigan in one of the best games of the season, the numbers that define Harbaugh's seven seasons at his alma mater are this: 3-9 against the Wolverines' two biggest rivals and 2-13 against top-10 opponents.

“We have to respond. Our backs are against the wall now,” Michigan quarterback Cade McNamara said.

Michigan extended Harbaugh's contract after he went 2-4 last season, but with a pay cut and a reasonable buyout.

He has responded by putting an undeniably good team on the field. Saturday was a chance to prove just how good, and Michigan outgained its in-state rival by 157 yards and went up 30-14 in the third quarter. The Wolverines also had a defensive touchdown taken off the board by a questionable replay review late in the first half.

Then Kenneth Walker and the Spartans roared back to make Mel Tucker the first Michigan State coach to win his first two games against Michigan.

The only downside for Michigan State to Tucker's quick turnaround of a program that appeared to be heading for a long rebuild after a messy end to Mark Dantonio's tenure is that the new guy's stock is soaring — and USC and LSU have vacancies. Heck, maybe the NFL will come calling for Tucker, who spent 10 seasons in the league as a defensive assistant and coordinator.

There will be questions about settling for so many field goals against Michigan State; about a defense that struggled to adjust to the Spartans' tempo; and about using backup quarterback J.J. McCarthy in a big spot in the fourth quarter when the freshman lost a fumble.

Harbaugh said McNamara, who had a career-high 383 yards passing, was “working through something” on that series.

The bigger questions persist: Can Harbaugh make Michigan a team that beats Ohio State and contends for national championships? And is this good enough? Should Michigan not only expect better, but seek out better?

Michigan is victories against Maryland and Indiana away from securing at least a 9-3 season. Work in a win at Penn State and that's 10 wins with the fifth-ranked Buckeyes coming to Ann Arbor on Thanksgiving weekend.

All it would take is one victory against Ohio State to change everything for Harbaugh, but at 0-5 in that rivalry there is little reason to believe that's coming.

Beating Michigan State would have created some space for Harbaugh and Michigan to likely get through the rest of the season without the coach's status and existential questions about what the program should aspire to from becoming a trending topic in college football.

But here we are again, talking about Harbaugh.

College Football Playoff expansion talks pick up again next week with the conference commissioners and Notre Dame's athletic director scheduled to meet in Dallas on Wednesday and Thursday.

The 12-team plan unveiled in June has stalled as some commissioners push to retrace steps and consider an eight-team model.

Speaking to reporters at the Florida-Georgia game in Jacksonville, Southeastern Conference Commissioner Greg Sankey made clear eight is not a realistic option.

“Four or 12,” he said. “Eight with a whole bunch of automatic opportunities for conference champions does not work. I’ve been abundantly clear about that.”

Time is getting short and if consensus is not reached soon, the CFP is likely to be locked into its current four-team format through the rest of a contract with ESPN that expires after the 2025 season.

Earlier this week, the group that advocates for bowl games sent a letter to the commissioners urging them to keep the bowls as involved as possible, however expansion turns out.

“We need to decide a format first. And the format-working group has said let’s have first-round games (in the 12-team proposal) on campuses,” Sankey said. “So, that’s a clear tell on my part. But I’m certainly willing to listen to the conversation.”

CFP expansion hit a snag after the SEC's surprising power play with Texas and Oklahoma was revealed during the summer. The two Big 12 powers plan to move to the SEC by 2025.

Sankey was part of the CFP working group that developed the 12-team plan as the SEC was communicating with Texas and Oklahoma about a conference switch. That has left some of the newest conference commissioners (Pac-12, Big Ten and Atlantic Coast Conference) skeptical of the CFP expansion process.

“So the commentary from any number of anonymous sources that I cooked this up as any sort of expansion plan is incorrect," Sankey said. “We don’t include the West Coast (Pac-12) in the College Football Playoff two of seven years, that’s not good for college football.”

Sankey's comments were the most interesting thing to happen at the World's Largest Outdoor Cocktail Party as the top-ranked Bulldogs left no doubt who will be No. 1 when the first CFP selection committee rankings are released Tuesday night.

Undefeated Oklahoma and Caleb Williams made a strong last impression against Texas Tech, but the Sooners were wonky through the first half of the season and have no signature victories.

Unbeaten Cincinnati would like to make a case, but it would be unprecedented for the committee to give a Group of Five team that kind of respect. The Bearcats were less than their best against a Tulane team that was really just trying to keep it close with third- and fourth-string quarterbacks.

On the resume front, the news was good for the Bearcats as No. 11 Notre Dame improved to 7-1 by beating North Carolina and Houston beat No. 19 SMU in a wild American Athletic Conference game. Cincinnati has to play SMU in a few weeks but doesn't face Houston in the regular season. UC could get Houston in the AAC title game.

If the Mustangs (7-1) and Cougars (7-1) keep up the good work, that could give the Bearcats two potential victories against 10-win teams.

How about unbeaten Michigan State for No. 2?

Of the best one-loss teams, Oregon, which finally had an easy one against Colorado, might still have the best single victory at Ohio State. The Buckeyes took care of business against Penn State.

And then there is Alabama. The Crimson Tide earlier lost to a team with two losses ( Texas A&M ), but the committee tends to default to 'Bama when in doubt.

AROUND THE COUNTRY: The second-best team in the SEC West this week is No. 18 Auburn after the Tigers drove RB Tank Bigsby over No. 10 Ole Miss. ... There is no figuring out the ACC. Just when No. 17 Pitt looked as if it was ready to assert itself, Miami came to town and beat the Panthers. Behind redshirt freshman quarterback Tyler Van Dyke, the Hurricanes have consecutive victories against Top 25 opponents for the first time since 2017. Things suddenly looking much better for Miami coach Manny Diaz. ... Not so much for Nebraska coach Scott Frost. The Cornhuskers were favored to beat Purdue but lost at home and have Ohio State, Wisconsin and Iowa remaining. If this does turn out to be Frost's last season coaching his alma mater, here is why: 6-10 combined record against Illinois, Purdue, Northwestern and Minnesota. ... Team of the week? How about Washington State after the Cougars rolled over supposed Pac-12 South contender Arizona State. Kudos to Wazzu and interim coach Jake Dickert for not giving up on the season after the COVID-19 vaccine fiasco involving former coach Nick Rolovich. ... No. 16 Baylor handed Texas its fourth loss. The last time the Longhorns lost fewer than four games in a full season was 2009. ... Thoughts and prayers to anybody who had Florida State getting 9 1/2 points from Clemson and lived through the baddest of beats. ... No. 13 Wake Forest is the only Power Five team to have never been ranked in the top 10. Demon Deacons are going to be knocking on the door Sunday. ... The wildest play of the day belonged to Bowling Green, which sealed a victory against Buffalo with a faked quarterback kneel down. Falcons coach Scot Loeffler was also ejected from the game after getting two unsportsmanlike conduct fouls for arguing with officials. #MACtion, indeed.