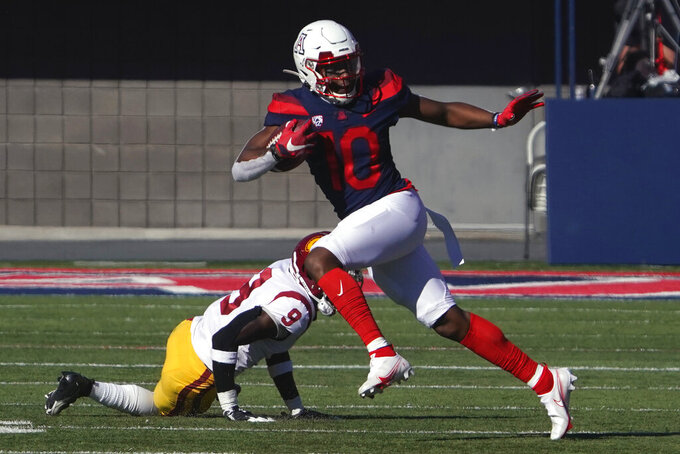 TUCSON, Ariz. (AP) — Jedd Fisch wasted no time creating a buzz before his first season at Arizona by bringing in big-name assistant coaches, reconnecting with former players and through social media savvy.

He hopes it will all translate to more wins on the field. That could be the hard part.

“They have been down the last couple years,” Fisch said. “We talk about the winning culture, and we don’t talk about what happened in the past.”

The past has not been all that great.

The Wildcats opted to pay a hefty buyout to fire Sumlin and replaced him with Fisch, a coach with extensive NFL and college experience but who never was the head guy.

Some Arizona fans were not exactly thrilled about Fisch's hiring, but he's won them over by hiring a top-notch staff of assistant coaches, including Don “Dr. Blitz” Brown and Brennan Carroll, son of Seahawks coach Pete Carroll.

On the field, the Wildcats have plenty of question marks, including a new quarterback and a defense that's been among the worst in the Pac-12. Arizona was picked to finish last in the conference, which Fisch hopes to change.

Grant Gunnell, the primary starter last season, transferred to Memphis, leaving the Wildcats with a hole at quarterback.

Plummer threw for 388 yards in three games for Arizona last season and can extend plays with his legs. Cruz made one appearance last season against USC and is a good decision maker.

South Florida transfer Jordan McCloud has the most experience on the roster, but didn't have the benefit of spring practice. The sophomore played 20 games for the Bulls, accumulating a combined 3,127 yards and 15 TDs.

Arizona had been known for sitting back on defense under the previous two coaches, something that won't happen under Brown.

“Dr. Blitz” likes to play a hyper-aggressive defense and brings 45 years of experience to the desert, the last five at Michigan. The Wildcats have been among the Pac-12's worst defenses for years, so the change could do them some good.

Arizona has some size and experience up front, should be in decent shape in the backfield, but will have a new linebacking unit.

Arizona has been known as an offense that plays fast and puts up big numbers, but that could change under Fisch.

The ground game will play a much bigger role in Tucson this season and all those spread formations fans have been used to seeing will often be replaced by the quarterback taking the snap under center.

Arizona should have a solid offensive line and has a couple of playmakers at receiver in Stanley Berryhill III and Jamarye Joiner.

Arizona has what could be a difficult opener, facing BYU in Las Vegas on Sept. 4. If the Wildcats lose that and a game against San Diego State, they could finally end their losing streak at home against FCS Northern Arizona at home on Sept. 18.

Arizona opens Pac-12 play on the road against Oregon and has to play USC on the road. The Wildcats close the season on the road, hoping to avenge last year's blowout loss to rival Arizona State.