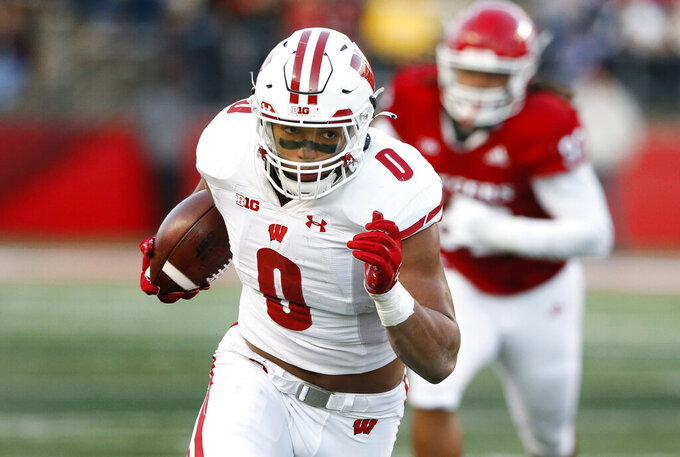 FILE - Wisconsin running back Braelon Allen (0) rushes against Rutgers during the second half of an NCAA college football game, Saturday, Nov. 6, 2021, in Piscataway, N.J. Allen looks like the next great Badgers back. After barely seeing the field in Wisconsin's first four games, he ended up running 1,106 yards and 7.06 per carry.(AP Photo/Noah K. Murray, File)

Running the ball against the vaunted Wisconsin defense has been nearly impossible all season — even for opponents who weren’t missing their top two tailbacks, like Arizona State is in the Las Vegas Bowl.

The Sun Devils will have both the odds and the Badgers’ fearsome defensive front stacked against them Thursday night when they attempt to pull off the upset in Sin City.

“Well, the backs we have left, it’s going to be interesting,” Arizona State coach Herm Edwards said with a wry smile.

Rachaad White, who rushed for 1,006 yards and 15 touchdowns as a redshirt senior, is skipping the bowl game with an eye toward the NFL draft. DeaMonte Trayanum was third on Arizona State with 402 yards and six touchdowns, but the sophomore is transferring to Ohio State to play linebacker.

That leaves Daniyel Ngata, who has flashed in limited opportunities the past two seasons and chipped in with 286 yards and three touchdowns as a redshirt freshman, and walk-on George Hart III to carry the ball for the Sun Devils (8-4). They’ll face a front seven for the Badgers (8-4) that led the FBS by conceding just 65 yards per game on the ground.

Running back isn’t the only position in flux for Arizona State. Cornerbacks Chase Lucas and Jack Jones are bypassing the bowl to focus on their professional careers, as is top linebacker Darien Butler. Edwards said he doesn’t begrudge those decisions and is hoping the playing time freed up by those absences can provide a spark.

“We’ve kind of been that way all year,” he said. “We didn’t have the same roster when we left training camp when the season started, and obviously going into this bowl game it’s not the same roster we had during the season. But that’s fine. We’ll play the players we have, and we’ve got some young guys that are excited about the opportunity.”

Wisconsin is dealing with its own issues, with injuries expected to lead to a shakeup on offense. Starting right tackle Logan Bruss is doubtful to play because of a lingering foot injury that bothered him during the last month of the season, while center Joe Tippmann has been limited in practice leading up to the bowl because of an undisclosed ailment.

While Las Vegas went through significant reinventions over the past 30 years, its bowl game was played in Sam Boyd Stadium, an outdated venue 10 miles from the Strip, since its creation in 1992. That changes when the game finally moves to Allegiant Stadium, the palatial home of the NFL’s Raiders. Last year’s game was scheduled to be the first in its new setting before being canceled because of the pandemic. With it comes a change in tie-in, continuing its Pac-12 affiliation against an opponent from the Big Ten or SEC on a rotating basis.

The Badgers’ 23-13 loss to Minnesota in their regular-season finale cost them a place in the Big Ten title game, but Bruss believes the disappointment has turned into resolve over the past month.

“There was nobody that was content with how that turned out, obviously, but I think the time to kind of rest after the game and kind of recover yourself helped everybody a lot. And I think the energy has been really good out at practice these last few weeks, so I think everybody is excited to finish it off right,” he said.

Sun Devils quarterback Jayden Daniels didn’t have to do much in the 2019 Sun Bowl against Florida State, throwing for 195 yards and rushing for 36 in a 20-14 win. The junior will likely have to show more of his dual-threat skills to join Taylor Kelly and Danny White as the third Arizona State starter to win multiple bowl games.

Wisconsin has won five of six bowl games under coach Paul Chryst. That includes a 42-28 victory over Wake Forest in the Duke’s Mayo Bowl last year, but the usual pomp and circumstance was reduced because of the pandemic. With the return of bowl activities and being in a setting like Las Vegas, Chryst is relying on his upperclassmen to prepare their inexperienced teammates for how to keep everything in perspective.

“Here we got two classes, we got last year’s freshmen and this year’s freshmen, that really haven’t been in what you say would be more of a traditional bowl (experience). I think the older guys have done a great job with this, and we've got to make sure that our younger guys understand,” Chryst said.