Arkansas AD on football: 'I have to get this search right' 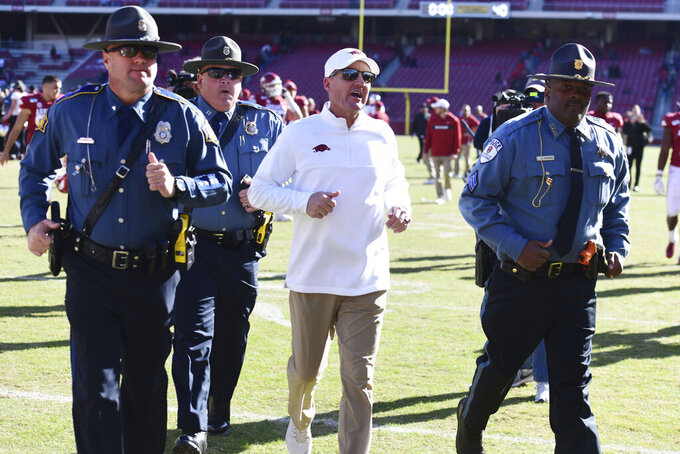 Arkansas coach Chad Morris heads to the locker room after the Razorbacks 45-19 loss to Western Kentucky during the second half of an NCAA college football game, Saturday, Nov. 9, 2019 in Fayetteville, Ark. (AP Photo/Michael Woods)

FAYETTEVILLE, Ark. (AP) — Arkansas athletic director Hunter Yurachek said Monday he felt the football program was moving in reverse over the past month, leading to the firing of second-year coach Chad Morris after 22 games.

Morris was 4-18 in two seasons and was winless in Southeastern Conference games. The tipping point came Saturday as the Razorbacks were badly outplayed from the outset in a 45-19 loss to Western Kentucky at home in front of a sparse crowd of 42,985.

"I thought the football program had taken a step backward," Yurachek said a day after the firing was announced. "I think it was clear over the last several weeks that we were no longer competitive on the football field. I got the sense that players were no longer enjoying playing the game."

Arkansas (2-8, 0-6 SEC) has not won a game since Sept. 14, a 55-34 win against Colorado State. Over the past four weeks, the Razorbacks were outscored 198-60 in lopsided losses to Auburn, Alabama, Mississippi State and Western Kentucky. Three of those four losses were at home. Arkansas has lost 17 consecutive SEC games dating to 2017.

"We will follow his employment agreement," said Yurachek, who was announced as the AD just one day before Morris got the job in 2017. "We will pay 70% of his contract value over the next four years. We have the means to do so, and we were comfortable doing so."

Morris was introduced in December 2017, replacing Bret Bielema, who was fired after five mostly average seasons and a 29-34 record. Morris signed a six-year contract with a base salary of $3.5 million annually.

The 50-year-old Morris was the coach at SMU for three seasons and before that was the offensive coordinator at Clemson from 2011-2014 and Tulsa in 2010. Before entering the college coaching ranks, Morris was a highly successful high school coach in Texas, winning a number of state championships.

Yurachek said he sensed the team starting to slide during the second half of the Kentucky game, a 24-20 loss. That was followed by the current four straight blowout losses.

The search for a new coach will include current head coaches, former head coaches and coordinators, Yurachek said, adding that he is considering employing a search firm. He did not put a timeframe on when he would have the new coach in place.

"I know I have to get this search right," he said. "We have to make sure we get the right candidate in here. We have to put a competitive product on the field."

Yurachek has turned to assistant coach Barry Lunney Jr., a former quarterback for the Razorbacks in the early 1990s, to serve as the interim coach for the remainder of the season. Arkansas has an open date this week before closing the season with games at No. 1 LSU and the season finale against Missouri.

Lunney was a member of the Arkansas football team when coach Jack Crowe was fired in-season after a loss to The Citadel in 1992. Lunney said he drew on that experience when he met with the team Sunday night.

"Twenty-seven years ago, I was thrust into a similar situation," Lunney said. "Joe Kines took over in 1992, and he said at that time, 'We're all interim.' I told the players last night that I saw first-hand what it was like. This is a little bit different. This is all about our players, and it's about giving them their best chance to succeed these last few weeks. I know what they are going through."

Lunney said he told the players that the freshmen on that 1992 Arkansas team played in the SEC championship game as seniors.

"I was the right fit for this time, so I'm flooded with memories and things of the past," Lunney said. "I remember how Kines invigorated the football team when I was a player. He gave us hope and confidence, and I want to do that for our players. Being the head coach at Arkansas is a dream of mine, but my sole focus is getting our players to play their best game when we go to LSU. I just want it to be the best we've played. That is my sole focus."