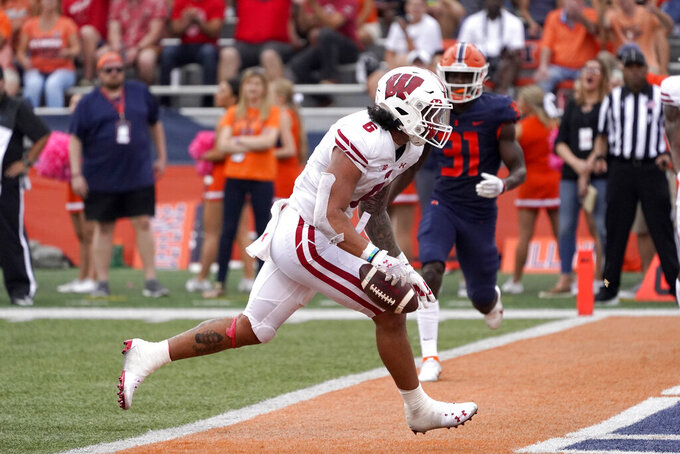 MADISON, Wis. (AP) — No team in the country runs the ball a greater percentage of the time than Army. No team does a better job of stopping the run than Wisconsin.

That sets up an intriguing matchup Saturday night when Wisconsin (2-3) attempts to stop Army’s triple-option attack. Army (4-1) will be attempting to beat a Power Five team for the first time since defeating Duke 21-16 in 2017.

“The opportunity is obvious,” Army coach Jeff Monken said. “Our kids will just be excited to have the opportunity to play a team like that, a team that I know they grew up watching.”

Army has run the ball on 90.8% of its snaps and has averaged 318.2 yards rushing, second only to Air Force among Bowl Subdivision teams. Air Force averages 66.5 carries per game – slightly ahead of Army’s 65 per game – while running the ball 90.1% of the time.

Wisconsin allows 41.4 yards rushing per game and 1.66 yards per carry to lead the nation in both categories.

Neither team has seen anything quite like what it will be facing Saturday. Wisconsin defensive coordinator Jim Leonhard said he started preparing his players for Army’s triple option as far back as this spring.

“It’s almost like we have two defenses,” Wisconsin defensive end Matt Henningsen said. “We have our base defense, and then we have our defense for Army week.”

The Badgers are hoping that extra practice pays off. They’ve seen enough of Army’s offense to know they’re facing something unique.

“It’s something you’re not used to seeing,” Wisconsin linebacker Jack Sanborn said. “Everybody thinks that it’s just the normal triple option, but they can do so many different things off of it, so many different variations.”

Army’s challenge is dealing with a step up in competition. The Black Knights, who haven’t faced a Power Five team this season, had two weeks to prepare for this game after losing 28-16 at Ball State on Oct. 2.

While the game could come down to how well Army’s triple option fares against Wisconsin’s vaunted run defense, the matchup between Wisconsin’s running game and Army’s defense also bears watching.

Wisconsin is coming off arguably its best performance of the year, as the Badgers recorded their first shutout and rushed for a season-high 391 yards in a 24-0 victory at Illinois.

Although Army hasn’t beaten a Power Five team since 2017, the Black Knights have come close.

Army enters Saturday's game as a 13 1/2-point underdog, according to FanDuel Sportsbook.

Wisconsin dismissed Jalen Berger from the team Sunday, leaving the Badgers without their top rusher from last season.

But the Badgers still have plenty of firepower in the backfield with Clemson transfer Chez Mellusi and freshman Braelon Allen. Mellusi rushed for 145 yards and Allen ran for 131 yards against Illinois.

The off week gave Army quarterback Christian Anderson some more time to recover after he missed the Ball State game with a shoulder injury, but that doesn't necessarily mean he will be back Saturday. Tyhier Tyler started in Anderson's place against Ball State.

“This week with Christian getting nursed back to health, we've actually gotten him into practice, and he's been able to take some reps with us,” Monken said. “Tyhier's gotten really most of them with the ones, shared by Jabari Laws."

Army’s much better at protecting the football, with just three turnovers all season. Wisconsin has 14. Marshall is the only FBS team averaging more turnovers per game.