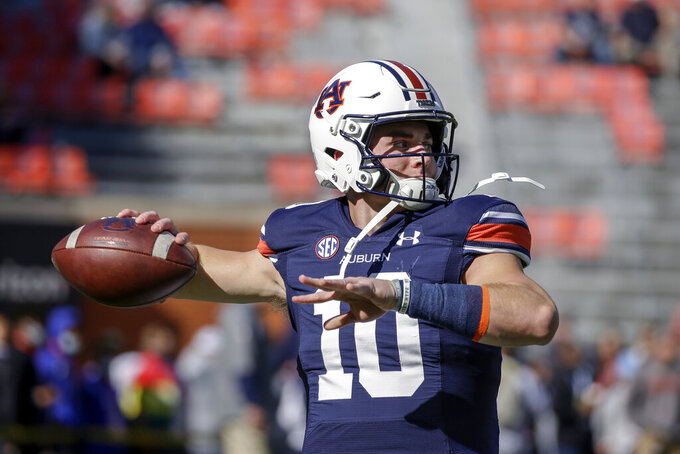 Auburn quarterback Bo Nix (10) warms up before the start of an NCAA college football game against Mississippi State Saturday, Nov. 13, 2021, in Auburn, Ala. (AP Photo/Butch Dill)

AUBURN, Ala. (AP) — Auburn quarterback Bo Nix will miss the final two games of the regular season with an ankle injury.

Nix was injured in a 43-34 loss to Mississippi State Saturday that represented the program's biggest collapse after leading 28-3. A team spokesman confirmed Sunday night that the Tigers quarterback is scheduled to have surgery on Monday.

Nix, a three-year starter, stayed in the game before getting replaced by LSU transfer T.J. Finley in the final minutes. Auburn visits South Carolina on Saturday and closes the regular season against No. 2 Alabama.

“Bones break and things change, but God is always the same,” Nix posted. “One of my favorite verses is John 13:7, ‘Jesus replied, “You do not realize now what I’m doing, but later you will understand.’ The Lord’s timing is our schedule. The road to recovery begins tomorrow.”

Having started all 34 games since arriving as a five-star recruit three years ago, Nix has completed 197 of 323 passes with 11 touchdowns against three interceptions this season. He has also run for four touchdowns.

Finley started five games at LSU as a freshman, making his first start against Saturday's opponent, South Carolina. He went 2-3 as a starter before losing the job to Max Johnson. Finley transferred after the spring.

His biggest impact came when he threw the go-ahead touchdown pass late in a comeback win over Georgia State. That prompted some fans to clamor for a change in starter, but coach Bryan Harsin stuck with Nix.

Auburn (6-4, 4-3 Southeastern Conference) fell out of the rankings with the Mississippi State loss.