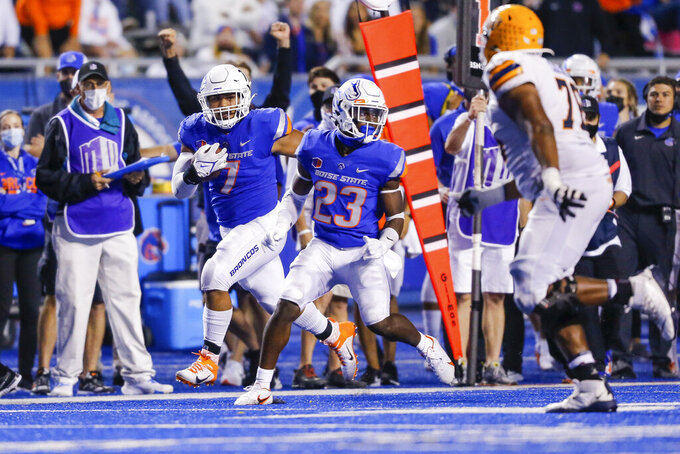 Boise State linebacker Ezekiel Noa (7) runs with the ball behind the blocking of safety Seyi Oladipo (23) after a fumble by UTEP during the second half of an NCAA college football game Friday, Sept. 10, 2021, in Boise, Idaho. (AP Photo/Steve Conner)

Boise State (1-1) gave first-year coach Andy Avalos his first win and the program’s 20th straight home opening victory, playing in front of a capacity crowd for the first time since 2019.

Avalos, who played linebacker at Boise State from 2001-04, relished the victory as well as the opportunity to play in front of a raucous home crowd.

“To be able to go out in that stadium and have it packed the way it was—when there’s that type of energy in the stadium, that’s a home field advantage,” Avalos said.

UTEP (2-1) appeared primed to put up a fight early despite being 25-point underdogs. But six turnovers along with a defense prone to yield big plays ultimately doomed the Miners.

“(Boise State) played a great game and did a lot of really good stuff, but we didn’t play well and made way too many turnovers,” UTEP coach Dana Dimel said. “Way too many mistakes to win in an environment like this.”

With the score tied 3-3 in the first quarter, Cobbs wove through traffic after fielding a punt before breaking out of the swarming UTEP coverage team and raced 81 yards for a touchdown.

“The punt return was a huge spark for us,” Avalos said. “And we say that special teams is a clear window of what we are as a team because that’s when we all come together.”

After Cobb’s big return, the offense came together under Bachmeier’s direction. He hit seven different receivers in leading the Broncos on six consecutive scoring drives.

Andrew Van Buren also rushed for a pair of touchdowns for the Broncos.

Quarterback Gavin Hardison led the Miners with 15-of-24 passing for 223 yards one touchdown and three interceptions.

THE MAGIC OF SHAKIR

While Bachmeier has plenty of playmakers around him, it’s apparent that senior wide receiver Khalil Shakir is something special — and vital to the team’s success.

In the Broncos’ opener against Central Florida, Shakir was limited due to leg injury. He was only involved in five plays, but those were some of Boise State’s most electric ones, netting 91 yards. And he was at it again Friday night against UTEP — this time closer to a hundred percent as he finished with seven catches for 166 yards.

And some of them were dazzling.

Shakir made a one-handed grab on the UTEP 23 for a 31-yard gain early in the first quarter, getting the Broncos into field goal position for their first points of the game. Then he made another jaw-dropping one-handed snag in the second quarter on a 19-yard pickup.

“You just don’t see things happen like that all the time,” Avalos said before bringing the Shakir praise down to earth. “But we’ve got to work on that ball security. That ball was floating around out there a little bit too much and he knows that, so there are still some things he can work on.”

Boise State: The Broncos showed just how explosive their offense can be, something they will need if they intend to take down Oklahoma State next weekend. With 12 plays going for more than 15 yards, Boise State kept UTEP on its heels all night long. For a defense that’s still coming together, the team’s success this season in big games will hinge upon its ability to strike big and often.

UTEP: After falling behind quickly Friday night, the Miners abandoned their running game, the strength of their offense. They’ll need to keep turnovers to a minimum and avoid falling behind early if coach Dana Dimel hopes to see success in conference play.

UTEP will return to action at home against New Mexico on Sept. 25.