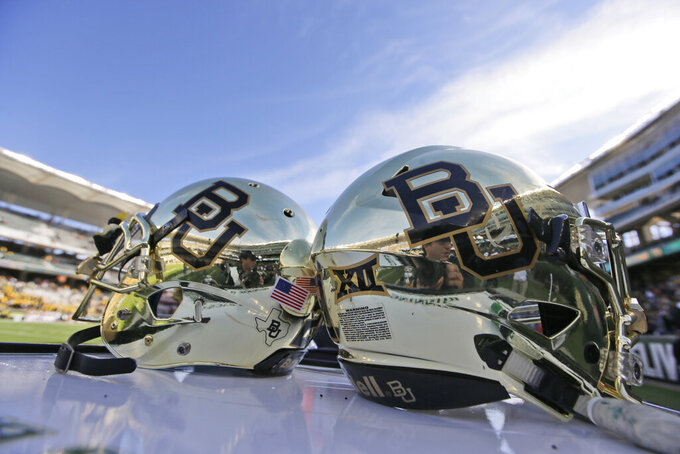 FILE - In this Dec. 5, 2015, file photo, Baylor helmets on shown the field after an NCAA college football game in Waco, Texas. The NCAA infractions committee said Wednesday, Aug. 11, 2021, that its years-long investigation into the Baylor sexual assault scandal would result in four years probation and other sanctions, though the “unacceptable” behavior at the heart of the case did not violate NCAA rules.(AP Photo/LM Otero, File)

The NCAA infractions committee’s decision against punishing Baylor for its mishandling of sexual assault allegations in a sprawling scandal involving football players was jarring -- even to the committee.

Joel Maturi, the chief hearing officer and a member of the committee for eight years, said the case was troubling for the seven-person panel, which included three women: Crimes being dealt with legally and in other forums were clearly tied to athletics, but off the table for NCAA punishments.

An association that governs athletic competition between schools has nothing in its vast bylaws that directly deals with the worst transgressions committed by Baylor.

“We all agreed the conduct was egregious. In some ways, we’ve never had discussions where we’ve wanted to penalize an institution. We’ve always gone into hearings trying to find out the truth and come to a right and fair conclusion,” Maturi said Wednesday after the committee released its findings in a highly critical 51-page report.

“Here, in many ways, many of us felt that there should be some penalty," said Maturi, a former Minnesota athletic director. "But the fact of the matter is, we could not come to that conclusion based on the bylaws that exist before us.”

The allegations against Baylor surfaced in 2016 and alleged that coaches and staff shielded football players from punishment and failed to take action on allegations of sexual assault or other violence. The infractions committee said the question it wrestled with was whether those athletes were given an “extra benefit” in the form of more lenient treatment than other students -- and the answer was no.

The actual mishandling of sexual assault claims by the school was deemed out of the NCAA's jurisdiction.

Legal experts say this is probably the right choice for an organization in the midst of dramatic change. The NCAA, stung earlier this year by a Supreme Court ruling against it in an antitrust case, is looking at ways to decentralize some of its governance. Just this week, the NCAA named a 23-person panel that will suggest changes to its constitution, setting the stage for a major overhaul.

NCAA President Mark Emmert alluded to the coming changes in a statement issued after the Baylor decision.

“This is a clear demonstration of why the association needs transformational change to create alignment between authority and responsibility to address the most critical issues in college sports” Emmert said.

Gabe Feldman, director of the sports law program at Tulane, said what happened at Baylor may have been "illegal, immoral and unethical” but that doesn't make it an NCAA violation.

Nebraska law professor Jo Potuto, a former infractions committee chair and her school's faculty athletic representative, said the NCAA should not be responsible for punishing every misdeed by an athlete, coach or athletic department.

“It think it's really a fundamental misconception of the NCAA's role,” she said.

Potuto pointed to the NCAA's attempt to punish Penn State for the Jerry Sandusky scandal as setting a bad precedent with the public.

The NCAA broke from its usual procedures when it handed Penn State a jaw-dropping $60 million penalty, plus postseason bans and scholarship restrictions for the football program. The fine was challenged in court and some of the penalties were rolled back.

Feldman said the NCAA doesn't have the expertise nor is it given the authority by its member schools to investigate Title IX allegations, which were prominent in the Baylor scandal. The question of jurisdiction also came up in an academic misconduct case involving North Carolina four years ago.

Linda Livingstone, Baylor's president since 2017 and part of the new NCAA constitutional convention committee, said she understands the perception that Baylor wasn’t punished severely enough by the NCAA. The football program was placed on four years of probation for rules violations between 2011 and 2016, including secondary impermissible benefits and drug testing violations.

Livingstone said Baylor has been held accountable in other ways, whether through the legal process, law enforcement and the criminal process in some cases or civil litigation in other cases. There was also a review by the school's accrediting body, and the school still has open cases with the U.S. Department of Education's Office of Civil Rights.

“And so while there certainly may be concern by some, and understandably so, about the NCAA process as it relates to this given the way in which the NCAA bylaws are written," Livingstone said, "I do think there are many other ways in which Baylor is and has been held accountable, and will continue to be held accountable, along with other institutions that are dealing with similar types of issues.”