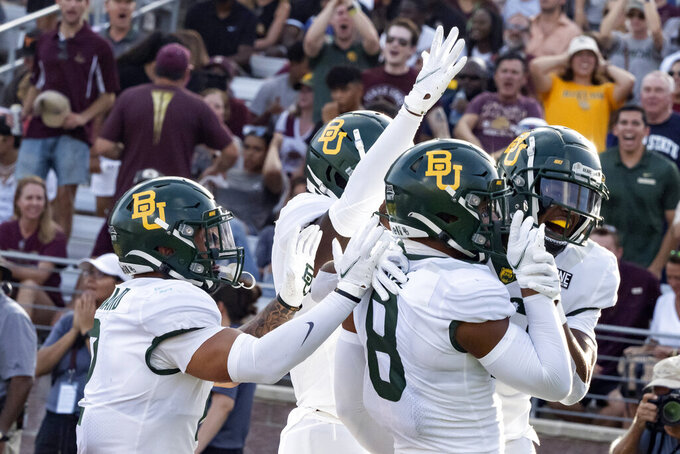 WACO, Texas (AP) — Abram Smith fumbled on his first carry this season for Baylor in his return to running back after finishing last year as a starting linebacker for the Bears.

“Extremely different, of course, because I’m on the other side of the ball,” Smith said. “I guess a different game speed now, a lot different than defense where you’re just kind of sitting back and reading. Now you’re having to make it happen. Read, boom, make it happen.”

Smith did just that after the opening miscue, and the Bears (1-0) go into their home opener Saturday night against SWAC team Texas Southern (0-1) already with two 100-yard rushers. Trestan Ebner ran for a career-high 120 yards while Smith had 118 yards rushing and two TDs in their win at Texas State.

Now Baylor plays its first non-conference home game in 735 days, also the first for second-year coach Dave Aranda. The last was a win over UTSA on Sept. 7, 2019.

The Bears moved Smith to defense midway through last season after a shoulder injury to Terrel Bernard, who led the Big 12 with 55 tackles in five games before getting hurt. Smith had redshirted as a freshman because of an injury in 2017, then played primarily special teams the next two seasons.

Smith led the Bears in tackles in four consecutive games. But with Bernard back this season, Smith returned to offense and overcame that quick turnover.

“His ability to bounce back early in the game was really strong,” Aranda said. “Abram is a very determined, mentally strong person. I think he’s got a really strong heart. Guys know him and respect him.”

Ebner and new offensive coordinator Jeff Grimes were among the first to approach Smith after the fumble at the Texas State 20, and told him to forget about it.

“It meant everything to me,” Smith said. "Like I killed the drive, so for them to tell me everything’s going to be OK, we’re going to be all right. That just changed my whole mindset from feeling sorry for myself to next play. … Go out and attack.”

STILL LOOKING FOR A ‘W’

Former Texas A&M assistant coach Clarence McKinney is in his third season at Texas Southern and still hasn’t won a game. The rebuilding Tigers went 0-11 in 2019, then lost the only two games they played last spring for the 2020 season delayed and abbreviated because of the pandemic. They opened last week with a 40-17 loss to Prairie View.

“We have to improve on our penalties,” Aranda said. “I thought it tightened the game. I think there were some penalties that were careless and were not reflective of who we are and who we want to be.

Baylor’s defense had three interceptions in the season opener. It was the sixth game in a row with a pick. The Bears have had 15 interceptions in 10 games since Aranda took over. Overall, they have twice as many takeaways (20) than they do turnovers (10) in that span.

Ebner leads all active FBS running backs with his 1,225 yards receiving. His 120 yards rushing last week gave him 1,011 in his career, making in the first Baylor player ever to go over 1,000 career yards rushing and receiving.