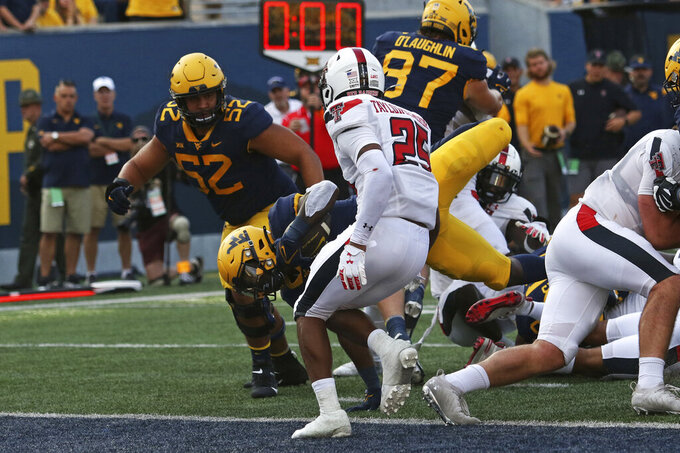 West Virginia running back Leddie Brown (4) is defended by Texas Tech defensive back Dadrion Taylor-Demerson (25) during the second half of an NCAA college football game in Morgantown, W.Va., Saturday, Oct. 2, 2021. (AP Photo/Kathleen Batten)

Baylor wants to regain its swagger in the run game. West Virginia would be satisfied with any progress.

The Bears and Mountaineers meet Saturday in Waco, Texas, after both lost games in which they failed to score in the first half.

Baylor had averaged 272 rushing yards in its first four contests, but the Bears punted on their first eight possessions at Oklahoma State and were limited to 107 yards on the ground. The exception was Abram Smith's 55-yard run for a third-quarter touchdown was an exception.

Baylor's Trestan Ebner had zero yards on eight carries and has 103 total yards in his last three games after starting the season with a pair of 100-yard games.

“We have to establish the run," Baylor coach Dave Aranda said. "If we’re getting safeties that are in the box as much as we were on Saturday, we have to be more effective at cracking them. Then we’re also going to have to complete balls down the field to stretch defenses where they don’t have seven, nine, 10-man fronts.”

The Bears (4-1, 2-1 Big 12) will get some resistance from the Mountaineers, who are 12th in the nation in rush defense, allowing just 88 yards per game. But West Virginia (2-3, 0-2) let Texas Tech go the length of the field on the deciding final drive last Saturday.

On the flip side, West Virginia's offense is last in the Big 12 in rushing at 116 yards per game — half of what Baylor averages. Coach Neal Brown is cognizant that the Mountaineers aren't getting a ton of possessions each game so they need to make the most of each one, including avoiding turnovers.

“Are we built right now to go outscore everybody in our league? We’re not,” Brown said.

As the only West Virginia running back with consistent carries, Leddie Brown has had to shoulder the load with backup quarterback Garrett Greene getting an occasional run.

“We’ve got to be better detail-oriented," Neal Brown said. "We haven’t been consistent enough with our footwork. Our run reads are not as good as they need to be. It goes back to these details in the footwork, where our eyes are supposed to be and doing that on a consistent basis.”

West Virginia has seen its share of losing on late field goals.

The Mountaineers' last two games against Texas Tech and No. 6 Oklahoma were decided on kicks in the final minute. There still might be some angst about their last visit to Waco in 2019, when Baylor made the go-ahead kick in the fourth quarter and the Bears blocked a tying field goal try by West Virginia.

Baylor linebacker Terrel Bernard could return after missing one game with a knee injury. Against the Mountaineers last year he had 13 tackles and an interception.

“We've got to account for where he's at,” Neal Brown said. "He's going to make tackles. We've just got to make sure those aren't tackles for losses.”

West Virginia has 19 sacks against the Bears over the past three meetings, including eight last year. The Mountaineers' lead the Big 12 with 17 total sacks this season while Taijh Alston and Dante Stills are tied for second individually with four apiece. Baylor has allowed only six sacks this season.

Baylor remains in the thick of the conference race and plays the next three games at home over four weeks. They’ll also host future Big 12 member BYU on Oct. 16 and Texas on Oct. 30.

"We can't let this one loss affect our whole season,” said Baylor left tackle Connor Galvin. a four-year starter. "We still have eight more weeks to go. We addressed it, fixed all the issues and now we're on to West Virginia this week.”

West Virginia quarterback Jarret Doege last week broke a streak of eight consecutive quarters without a touchdown pass. Doege said he’s not sure why West Virginia was shut out in the first half against Texas Tech but “we know it can’t happen again.”

He took some heat for missing an open Leddie Brown in the end zone in the fourth quarter from inside the Texas Tech 10-yard line. West Virginia settled for the tying field goal before the Red Raiders won it.

"Got to make a play when it counts,” Doege said.