BC gets play-caller back for bowl match with Boise, Rypien 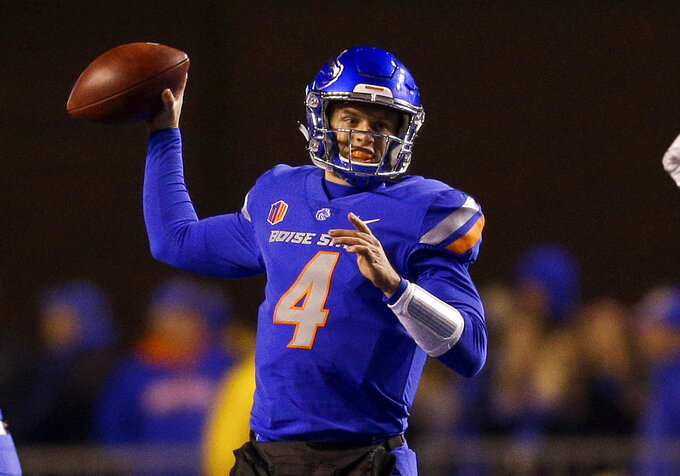 FILE - In this Nov. 9, 2018, file photo, Boise State quarterback Brett Rypien (4) throws the ball against Fresno State in the first half of an NCAA college football game in Boise, Idaho. Rypien is the active FBS career leader with 13,581 yards passing, a Mountain West record. He also shares the rare distinction with Kellen Moore, now the quarterbacks coach for the Dallas Cowboys, as a four-year starter for the Broncos. (AP Photo/Steve Conner, File)

DALLAS (AP) — Boston College coach Steve Addazio will have his play-caller for one more game before Scot Loeffler takes over at Bowling Green for good.

Just think of the SERVPRO First Responders Bowl against No. 23 Boise State on Wednesday as a one-game reunion after Loeffler spent most of the past month getting ready for his new job.

"He has been gone, but was able to get back for the prep week and we were moving right ahead to install the game plan, which isn't anything abnormal," Addazio said of his offensive coordinator from the past three seasons. "We are very appreciative that he is here. We gave each other a big hug and said, 'Let's go finish this thing.'"

The Eagles (7-5) are trying to get to eight wins for the first time under Addazio after finishing with seven victories in four of his first five seasons. BC lost in each of three previous chances to reach eight victories with a bowl win under Addazio.

The Broncos (10-3) have won at least 10 games in four of five seasons under coach Bryan Harsin , who has a 3-1 bowl record. Boise State lost to Fresno State 19-16 in overtime in the Mountain West championship game.

Harsin was a Boise assistant the only other time these teams played — on Boise's blue turf in the 2005 MPC Computers Bowl. Atlanta Falcons quarterback Matt Ryan led BC then, and threw for three touchdowns in a 27-21 victory.

"The motivation goes back to January when you set out and go do this work to play in a championship game," Harsin said. "You know if you do that you are going to play in a bowl game and the very best opponent that you can."

Boise quarterback Brett Rypien is the active FBS career leader with 13,581 yards passing, a Mountain West record. He also shares the rare distinction with Kellen Moore, now the quarterbacks coach for the Dallas Cowboys, as a four-year starter for the Broncos .

Rypien, the nephew of 1992 Super Bowl MVP Mark Rypien, is going for his third bowl win. Broncos running back Alexander Mattison is seventh nationally with 1,415 yards rushing and has 17 touchdowns.

"The quarterback has so much to do with the outcome of the game, and when you are playing against an elite quarterback and running back, that is a really good combination," Addazio said. "Hopefully it'll be a showcase for talented guys on both sides of the ball."

UNDER CENTER FOR BC

Anthony Brown needs one touchdown pass to match Boston College's sophomore record of 21, set by former NFL quarterback Glenn Foley in 1991. Brown became the first BC quarterback since Ryan 11 years ago to throw for more than 300 yards with five touchdowns in a game. He was 16 of 25 for 304 yards with five TDs in a 41-34 win over Wake Forest in September.

MOVING UP THE CHARTS

Boise redshirt sophomore defensive lineman Curtis Weaver has 20 1/2 career sacks with 9 1/2 this year after leading the Mountain West with 11 as a freshman. On the school's career list, he's already half a sack ahead of former Broncos pass rusher DeMarcus Lawrence, who was just named to his second straight Pro Bowl with the Cowboys.

Heisman Trophy winner Doug Flutie was the star the last time the Eagles played in Cotton Bowl Stadium, at Fair Park near downtown Dallas. It was a 45-28 victory over Houston in the Cotton Bowl, which has since moved to the home of the Cowboys in Arlington, halfway between Dallas and Fort Worth. Flutie threw two first-quarter touchdown passes in BC's first postseason win in 44 years.

Rypien is ninth nationally in passing yards (3,705) and touchdowns (30). There are plenty of beneficiaries. Sean Modster has the team's best shot at a 1,000-yard receiving season with 978 yards. He and fellow senior A.J. Richardson are tied for the team lead with eight receiving TDs.