BC QB Anthony Brown emerging as a leader for Eagles 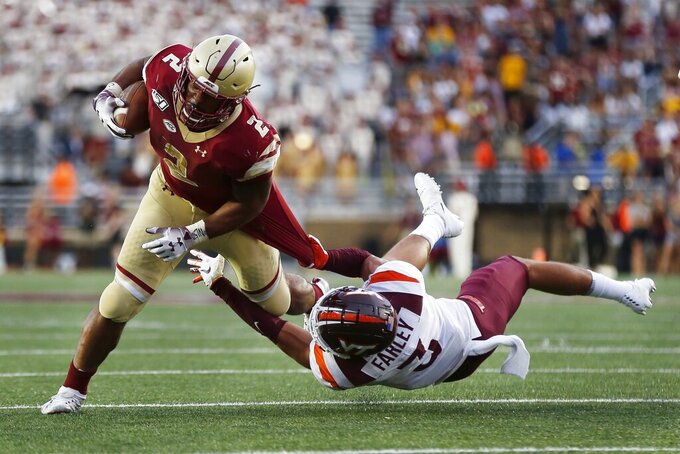 BOSTON (AP) — In two years of watching his starting quarterback grow, Boston College coach Steve Addazio could sense that it was coming.

The BC junior had won some big games, and lost some others the Eagles should have won. He had helped the team with his arm and with his legs. He came back from injuries. But what Addazio saw in the 35-28 victory against Virginia Tech last week was new.

"In the huddle, on the sidelines, he's driving the football team, and we've been just dying to see that come out of him," Addazio said as the Eagles prepared for Saturday's game against Richmond. "Just really making corrections, driving the team, total command, unfazed, not riding the roller coaster of the ups and downs of the games.

"At halftime, he was strong, real strong, and I loved it. It's what a veteran quarterback should bring to the table, and he brought it."

A 6-foot-2 redshirt junior, Brown completed 15 of 26 passes for 275 yards on Saturday, throwing for two touchdowns and running for another. Another game like that and he would be the ninth BC quarterback to throw for over 4,000 yards in his career.

But Brown also knows that part of his role is to lead.

"I would say it's a natural progression," he said. "We need a leader. We need somebody to step up, and it has to be me. We were missing that for the past two years, and right now I'm just ready to step into that role."

If Brown is able to take command in a way he hasn't in his first two years in the lineup, it could be the answer to a team that has been inconsistent — shooting to No. 17 in The Associated Press Top 25 last season before losing its last three games. The Eagles (1-0) have won seven games in five of Addazio's six seasons in Chestnut Hill, and no one is satisfied with that.

Least of all Brown.

"Anthony has definitely taken the next step," defensive lineman Tanner Karafa said. "I knew it was coming. .... Hopefully he'll continue to do that. I know he will."

"I think our guys will be excited to do this, to go up there and play," Spiders coach Russ Huesman said. "Any time you get to go play a BCS school, it's pretty cool for our guys."

With the Hokies concentrating on stopping AJ Dillon last week, BC turned to backup David Bailey for a couple of key runs, carrying the ball five times for 19 yards on a game-clinching drive that ended with his 1-yard TD.

The 6-foot-1, 240-pound sophomore saw some action last year when Dillon was sidelined nearly a month with an ankle injury, gaining 112 yards against Louisville. On Saturday, he carried 12 times for 38 yards to supplement Dillon's 81 yards on 23 carries.

"David came in, and he's a load, man. He's a very physical, punishing runner with great hands," Addazio said. "Those guys, when they run, it's exhausting because they're running and driving piles. ... The style that we play, the offense that we play, that big back offense and tempo, when you get a couple of first downs, you're wearing that defense down."

"We may face one as big, but he won't run as fast and he won't be as good, I promise you that," Huesman said. "He's probably one of the top two or three backs in college football."

The BC coaching staff knows a thing or two about the Spiders. Defensive ends coach Jim Reid was the head coach at Richmond for nine seasons, earning Atlantic 10 Coach of the Year honors in 1998 and 2000, and assistant head coach Frank Leonard spent 10 seasons there.

"And having known those guys for all that time when they were there and of course here now, I understand what Richmond football is all about," Addazio said. "It's a wonderful school. It's a very prideful place, with the ability to attract and recruit really good student-athletes and they've had great success over the years, not just as a whole, as a season, but also in terms of playing Power 5 opponents."