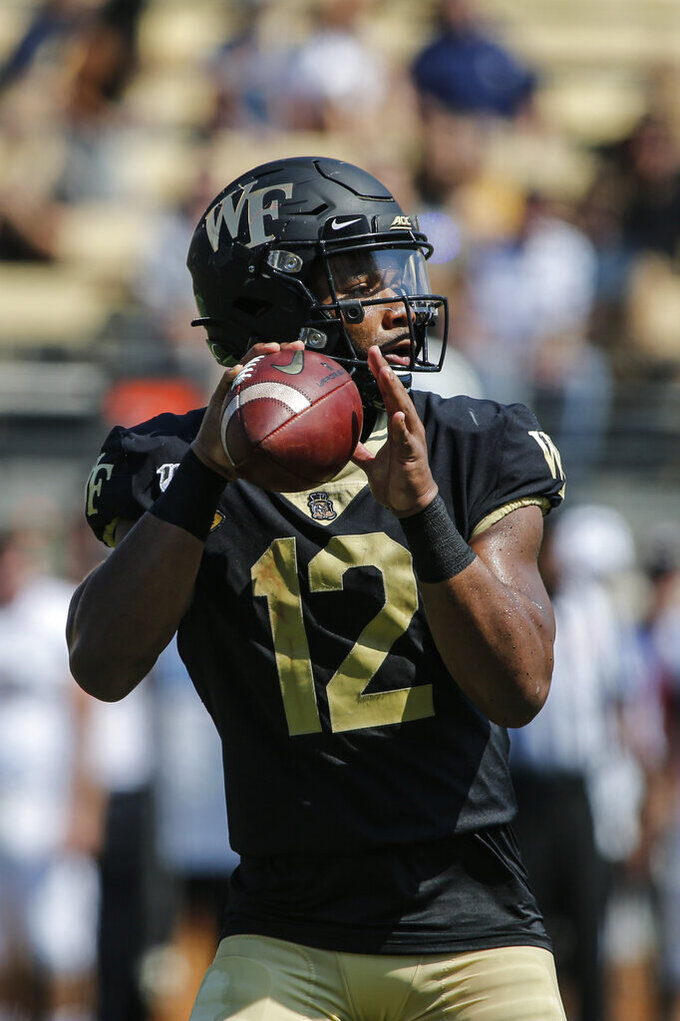 BOSTON (AP) — Wake Forest coach Dave Clawson saw Anthony Brown at his worst, when the Boston College quarterback struggled against the Demon Deacons as a rookie.

The next year was a different story.

After getting picked off three times two years ago in his first Atlantic Coast Conference game, Brown went down to Winston-Salem last year and threw for career highs of five touchdowns and 304 yards while leading BC to a 41-34 victory.

As Clawson prepares to face the Eagles again Saturday, he knows which version he's expecting.

"He had a career day against us a year ago. He is athletic, has a strong arm, he's accurate, he knows the offense well," the Wake Forest coach said this week. "He has become a really good quarterback."

Clawson called Dillon a "downhill load" who is destined for the NFL.

"They are truly a one-two punch to me," said Eagles coach Steve Addazio, who pointed to an 18-play drive in the fourth quarter of last week's 30-16 victory over Rutgers, when Dillon had seven runs, including a 4-yard touchdown, and Bailey had four.

"I mean, an 18-play drive," Addazio said. "And at the end of that drive, when we were punching it in the end zone, we were surging off the ball. ... I mean, Boom, they were getting knocked back, and we were surging, and there was no sign of anybody being gassed after 18 plays."

On the Eagles' next drive, the last one of the game, they ran the final 4:16 off the clock.

"We had a couple of those big time drives in the second half," said Addazio, whose team had the ball for 13:01 of the 15 minutes in the fourth quarter. "Why in the four-minute drive can we look so powerful like that? Because we've got two tailbacks that are still relatively fresh, and they've still got some juice left in them, and the defenders are getting worn down."

Here are some other things to look for in Chestnut Hill on Saturday:

Wake Forest is 4-0 for the seventh time in program history and the third time in four years. A win over BC would give the Demon Deacons just their fourth 5-0 start and first since the 2006 team went on to win the ACC title and play in the Orange Bowl. Only three of the previous six teams to open with four victories went on to play in a bowl game, with the 1987, 1947 and 1944 teams missing out.

Wake Forest will match a 75-year-old school record with a seventh straight win if it beats the Eagles. The 1944 team opened 7-0 for the best start in school history. The Demon Deacons beat Duke in the 2018 regular-season finale and defeated Memphis in the Birmingham Bowl before winning four in a row to begin this season.

Addazio winces when he's asked about the teams' 2015 matchup, when Wake Forest won 3-0. It would be the only ACC win for either team, with both finishing 3-9 overall.

The Eagles were searching for a quarterback, with Jeff Smith and Troy Flutie taking snaps in the game; two more players would see time at the position before the end of the year. BC amassed 270 yards to 142 for Wake Forest and had 18 first downs to Wake's five, but also committed four turnovers.

"I think both teams have raised the athleticism of our teams," Addazio said. "We all remember a few years ago when the quarterback debacle was tough and it was just a different age."