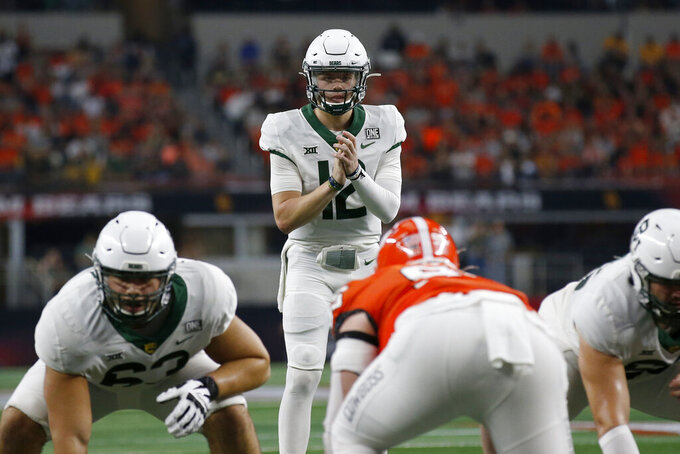 FILE - Baylor quarterback Blake Shapen (12) waits for the snap during the first half of the Big 12 Championship NCAA college football game against Oklahoma State in Arlington, Texas, Saturday, Dec. 4, 2021. The Big 12 is going into its 12th and final season as a 10-team conference. (AP Photo/Roger Steinman, File)

Reigning Big 12 champion Baylor, which is the preseason pick to repeat, opens head coach Dave Aranda's third season at home against a FCS team from New York. The Bears are coming off a school-record 12 wins last season that was capped by a Sugar Bowl victory. Albany lost its first eight games last season before winning two of the last three. The Great Danes, who play as a football-only member in the Colonial Athletic Association, have been at the FCS level since 1999 and made the playoffs twice (2011 and 2019).

The Bears should overmatch Albany in pretty much every aspect. Starting quarterback Reese Poffenbarger, a transfer from Old Dominion who didn't get to Albany until after spring practice, will take his first college snap Saturday after winning a four-player competition for the job in fall camp. The Bears return linebacker Dillon Doyle (90 tackles) and second-team AP All-America nose tackle Siaki Ika.

Albany: Linebacker Jackson Ambush led the Great Danes with 97 tackles last season. He had at least 10 tackles in six of their 11 games.

Sophomore Blake Shapen was named Baylor's starting quarterback at the end of spring practice. He did start twice last season, including being the MVP of the Big 12 championship game, when he had 17 consecutive completions and three TD passes. ... Baylor's defense has forced a turnover in 22 consecutive games. The Bears have 44 takeaways (31 interceptions, 13 fumble recoveries) in Aranda's 23 games as head coach. ... Baylor is one of only three teams nationally that didn't allow an opponent to score more than 30 points last season. ... Albany scored more than 24 points only once in 2021.