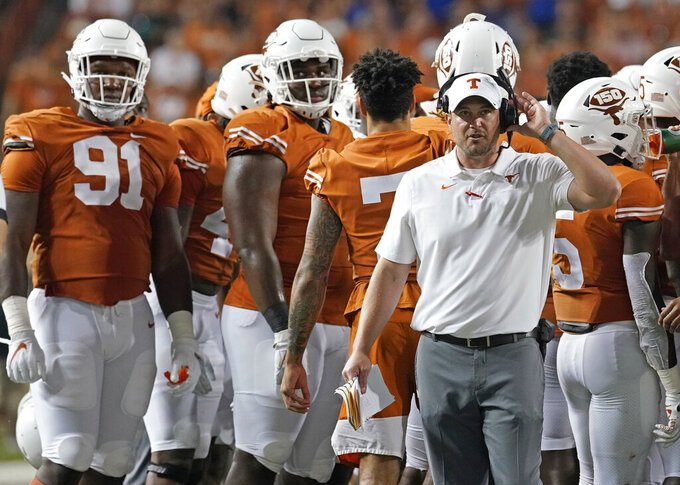 Some things to watch Saturday in Week 9 of the Big 12 regular season schedule:

No. 15 Texas (5-2, 3-1 Big 12) at TCU (3-3, 1-2). Both teams could use a win at the midpoint of their conference schedules, the Longhorns still want to get back to another Big 12 title game, and the Horned Frogs in danger of falling below .500 overall. TCU and coach Gary Patterson finally get back home for the first time in nearly a month. The Frogs had two Big 12 road losses with an open date in between since a 51-14 win over Kansas the last Saturday in September that seemed to have them headed in the right direction. Those same Jayhawks almost pulled off a shocker in Austin last Saturday, in a game Texas won 50-48 on a game-ending field goal after the two teams combined for 50 points in the fourth quarter and frustrated Longhorns coach Tom Herman. TCU is 5-2 in the series since joining the Big 12, but Texas did snap a four-game losing streak against the Frogs last year.

Oklahoma State RB Chuba Hubbard vs. Iowa State defense. Hubbard is the nation's rushing leader with 1,265 yards (180.9 yards per game) and 15 touchdowns. The Cyclones have allowed only 111 yards rushing per game, second in the Big 12, and a league-low five touchdowns. Only one running back has gained more than 58 yards against them, and that was 93 yards in a non-conference game. Hubbard had 22 yards on two carries last season against Iowa State, when the Cowboys still had Justice Hill, who was limited to 66 yards on 24 carries.

No. 14 Baylor has a nine-game winning streak and at 7-0 has already matched its 2018 win total. The Bears, coming off an impressive win at Oklahoma State, have an open date before playing Oct. 31 against West Virginia, which also isn't playing this weekend. ... Kansas State is home against No. 5 Oklahoma, the 27th time in school history the Wildcats have hosted a top-five team. They are 2-24 in those games, the last victory coming over No. 4 Texas in 2006. ... The Sooners, 7-0 for the first time since 2004, have won 22 consecutive true road games over the past years. That is the longest since their 25 in a row from 1953-58 under Bud Wilkinson. The next longest active streak is Clemson's 10 in a row.

Texas Tech is listed as a slight favorite at Kansas. The Red Raiders have won 19 of the 20 meetings between the two schools, including 12 in a row. But the Jayhawks are at home and still looking for their first Big 12 win or coach Les Miles after that big fourth quarter and near-upset against No. 15 Texas.

Jalen Hurts is certainly on pace for the opportunity to become the third transfer quarterback in three seasons to win a Heisman Trophy for Oklahoma. The dual-threat grad transfer from Alabama is averaging 397 total yards a game — 296.3 yards passing and 100.7 yards rushing per game. He has accounted for 30 touchdowns (20 passing, 10 rushing) with only three interceptions. He completed 16 of 17 passes for 316 yards and three touchdowns last week in a lopsided win over West Virginia.