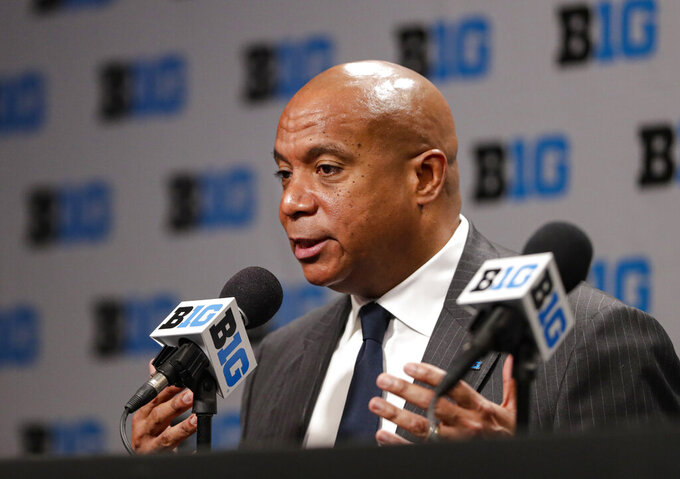 FILE - In this March 12, 2020, file photo, Big Ten Commissioner Kevin Warren addresses the media in Indianapolis after it was announced that the remainder of the Big Ten Conference men's basketball tournament had been canceled. The Big Ten has created a voter registration initiative to go along with its Anti-Hate and Anti-Racism Coalition. The conference hopes its 14 schools and thousands of student-athletes can leverage their platform to spur social change. Warren said the announcement of the voting initiative finalizes plans that have been in the works since February. (AP Photo/Michael Conroy, File)

The Big Ten has created a voter registration initiative to go along with its Anti-Hate and Anti-Racism Coalition, hoping its 14 schools and thousands of student-athletes can leverage their platform to spur social change.

“It all fits together," Big Ten Commissioner Kevin Warren said in a telephone interview. “I’m hopeful that what we do here will be able to lead the way for colleges around the world."

Warren, the first black commissioner of a Power Five conference, said the announcement Monday of the voting initiative finalizes plans that have been in the works since February.

Warren hopes the nonpartisan program will encourage student-athletes to become part of the electoral process. It will include monthly programming, beginning in July and ending with the general election in November, with participants from each Big Ten school.

“The right to vote is an incredible honor and most tangible and powerful way to make social change," Warren said. “And for many of our student-athletes, this will be their first opportunity to vote."

Last week, Warren said he was motivated to launch the Anti-Hate and Anti-Racism Coalition by the death of George Floyd in Minneapolis. Floyd died after a police officer kneeled on his neck, sparking massive protests against racism and police brutality around the country and world.

“I was very heartbroken by the death of George Floyd, but this is the most encouraged I have been in this country," Warren said. “After we finally hit rock bottom publicly, the only way to go is up from here. When you saw that happen to George Floyd on TV, you could not deny we have a problem. Now, we need to pull together to make this a better place for our children and grandchildren."

The Big Ten released the names of the people who will be part of its new coalition, which includes school presidents, athletic directors, coaches and student-athletes.

“I am thankful to have been nominated for such an incredible union,” said Illinois running back Ra’Von Bonner, who is part of the coalition. “I am an agent of change and will use my platform to create real change in this country."