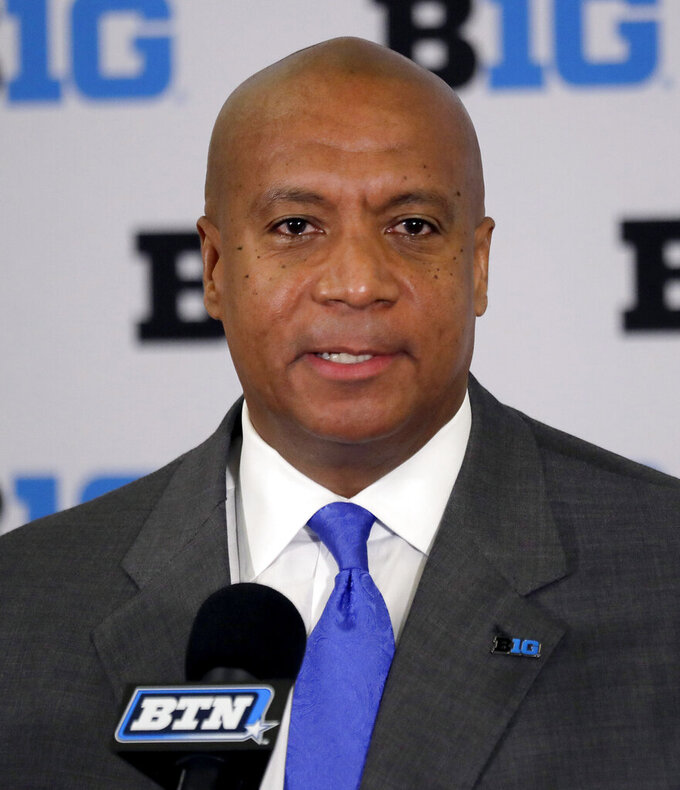 Warren understood the significance of the moment Tuesday as he became the first black commissioner of a Power Five conference. The Big Ten hired the Minnesota Vikings executive to replace Jim Delany, bringing on a former college basketball player and sports agent with a law degree from Notre Dame to lead one of the most lucrative leagues in the country.

"It's really about diversity, inclusion and it really is about opportunity," Warren said. "One of the things I will stand for here is to make sure regardless of your background — regardless of your race, color, creed, gender, ethnicity, sexual orientation — this will be a place from an exclusive standpoint that we will embrace everyone and give everyone an opportunity to be the best they can be."

He will start Sept. 16 and work alongside Delany, who will step down Jan. 1 from the job he has held since 1989. The 71-year-old Delany announced his decision to step away earlier this year. At the time, he planned to stay on until June 30, 2020.

It's not the first pioneering role for the 55-year-old Warren. He has been the chief operating officer for the Vikings since 2015, the first African-American to hold that position for an NFL franchise. And now comes another milestone among the Power Five, which includes the Southeastern, Pac-12, Big 12 and Atlantic Coast conferences.

"Do I think about it every single day? Yes," Warren said. "But I also remember it provides me with an opportunity to make sure that I send the elevator back down to give people who — other people may not have given an opportunity to people who look like me — to remember that. And to make sure that I perform at the highest possible level to open up the door to the next person regardless of their color."

Indiana President Michael McRobbie said the Big Ten considered more than 60 candidates. He would not say how many were interviewed. But there were multiple meetings with Warren, with the decision to hire him made on Sunday. Vikings owners Mark and Zygi Wilf had nothing but praise for Warren.

"He has worked tirelessly to elevate the Vikings franchise, all with the greater good of the organization and Minneapolis-St. Paul in mind," the Wilfs said in a statement. Warren said he and the Vikings haven't decided on his end date in Minnesota. The owners said they would work with Warren on "how we want to move forward."

Warren became emotional during the news conference, particularly when discussing his parents as well as the late SEC Commissioner Mike Slive.

He recalled a mutual friend arranging a meeting with Slive in the early 1990s at The Palmer House in Chicago — the famed hotel where the Big Ten was born and brownies invented in the 1890s. By the time he drove back to South Bend, Indiana, Slive had left a message on his answering machine offering him a job at his legal firm, where he started working on NCAA infractions cases.

Warren also remembered the tough obstacles he faced just to get back to walking let alone playing sports again after he got run over by a car. Just 11 years old, the kid who grew up in Phoenix was riding his bike with friends that summer day.

He heard paramedics say he might not make it but he wound up in traction and then a body cast with a broken right femur to go with a fractured wrist. As he was preparing to leave the hospital, a doctor told him swimming would give him the best shot at recovery, though the odds were not good.

Warren persuaded his parents to use some of his $30,000 settlement to install a pool in the backyard, arguing that community pools aren't open every day and they might not always be able to take him there. The future lawyer made such a strong case they had one built for $11,000, a life-changing decision for their son.

Along with the physical benefits from all those hours in the pool, whether he was swimming laps or playing "Marco Polo," there was this.

"When you actually pay for something, you appreciate it more," said Warren, who saved his mangled Schwinn until the movers threw it away after his father died. "For me at 11 years old, to formally write the check on something like that ... That made me mature at a really young age. And it saved my life."

Warren attended the University of Pennsylvania out of high school, but transferred to Grand Canyon University, where he scored 1,118 points. After earning an MBA from Arizona State and that law degree, he worked as a sports agent throughout the 1990s. Warren has been working in the NFL for 20 years, doing stints with the St. Louis Rams and Detroit Lions before settling in with the Vikings in 2005.

He will take over a sprawling conference that stretches from Rutgers and Maryland to Nebraska.

Delany helped the Big Ten grow to 14 schools, launched the first athletic conference television network, BTN, and helped create the first College Football Playoff while maintaining the conference's ties to the Rose Bowl. League revenues soared under his leadership. He negotiated TV deals worth billions that in 2018 produced $51 million for Michigan alone.

Conventional wisdom was the Big Ten would hire someone with current ties to the conference and college sports. The selection of Warren came as a surprise because he has neither.

"I'm ready for the challenge. I'm excited. I'm energized," he said. "But most of all, I'm grateful."