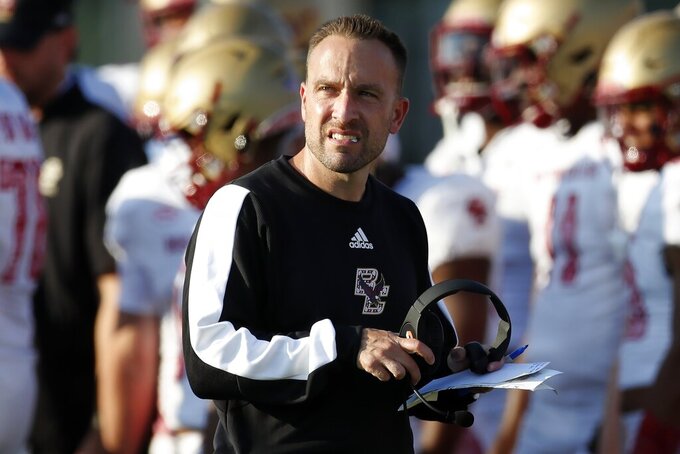 Boston College head coach Jeff Hafley stands on the field during a timeout in the second half of an NCAA college football game against Massachusetts, Saturday, Sept. 11, 2021, in Amherst, Mass. (AP Photo/Michael Dwyer) 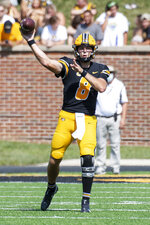 BC, a member of the Atlantic Coast Conference, will be hosting the first Southeastern Conference school since 1987.

Missouri second-year coach Eliah Drinkwitz knows there will be a lot of attention when he brings his Tigers to Chestnut Hill.

“Absolutely, any time you’re playing against an SEC opponent, you’re going to get their best effort and their best shot,” he said. “It’s the best conference in college football for a reason. You get measured by your performance against an SEC team.”

BC is off to its first 3-0 start in three years and just its second since the Matt Ryan-led Eagles started 2007 by winning their initial eight games.

Jeff Hafley, in his second season coaching BC, understands the attention will be on the matchup of the conferences, but he’s not getting caught up in that, at least publicly.

“I don’t think about what conference we’re playing against,” he said. “People will make it a big deal. They will. It’s just not how I handle things. No disrespect to that or obviously the SEC, but we’re not going to talk about that.”

Drinkwitz realizes the two conferences will be paying attention.

“There’s been a lot of trash talking between the leagues,” he said. “I’m sure they’ll be little extra motivation on both sides.”

Here’s what to look for when the teams meet Saturday:

Expect the Eagles, who rushed for 190 yards on 33 carries in last week’s 28-3 victory at Temple, to try to establish the ground game again. Missouri enters with the SEC’s worst defense against the run, allowing 267.33 yards per game — just over 70 yards more than Vanderbilt, the next poorest team.

“I would expect it to be similar. We struggled against it,” Drinkwitz said. “I don’t think it’s going to be a secret what they’re going to try and do. It’s no secret how we’ve got to stop it. It’s just: are we going to do it. We’ll find out Saturday. I promise you they’re going to run the football. That’s what I’d do.”

BC quarterback Dennis Grosel will be making his second start in place of top QB Phil Jurkovec, who was lost with a hand injury in the second game.

Jurkovec had surgery for a broken bone and could be out the rest of the season.

Grosel was just 5 for 13 against Temple, throwing for only 34 yards with one TD — on the game’s opening drive — and one INT.

“I think I came out pretty strong but got a little frustrated towards the middle of the game,” he said. “I think I just have to understand that it’s a long game, they’ll be drives that stall out and it’s a long game and I’m not going to make every play. I’d like to see myself be a little bit more composed, but it could have been first-game jitters.”

Hafley spoke highly of Tigers QB Connor Bazelak, who threw for 346 yards and three TDs in a 59-28 victory over the Southeast Missouri State last week.

“I think he’s one of best quarterbacks in the country,” Hafley said. “He’s a good player, he’s poised, he’s very accurate, he’s more athletic than people give him credit for.”

Drinkwitz was asked his opinion about playing a team in the Northeast.

“If I had my pick of it, I would rather play more of a regional game that’s more of a rivalry game,” he said.

He joked: “I don’t know the last time we signed a recruit from the great state of Massachusetts.”