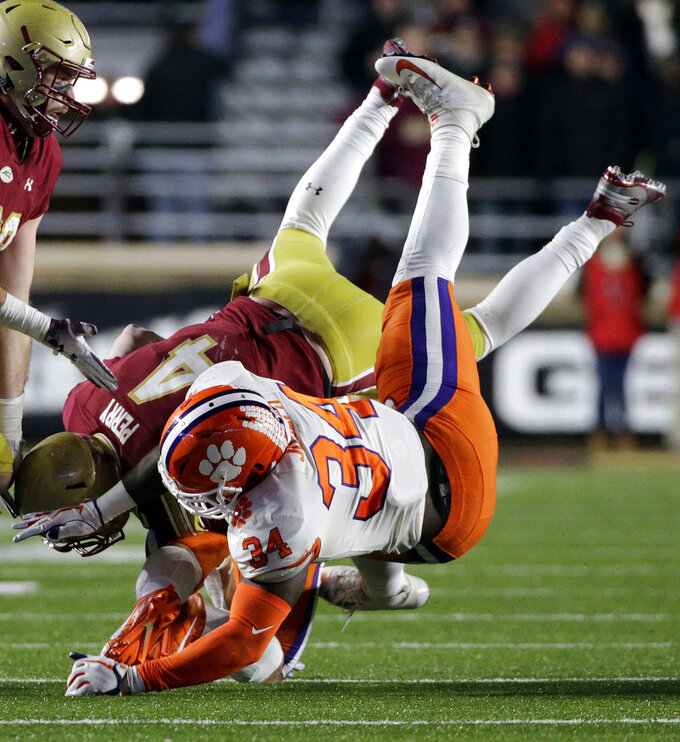 BOSTON (AP) — Boston College coach Steve Addazio would like to see college football adopt some of the same rules that the NFL is using to protect quarterbacks.

Two days after starter Anthony Brown sustained an abdominal injury when 315-pound defensive lineman Christian Wilkins landed on him, Addazio said he'd be in favor of a rule like the one in the pro league that punishes a defender for coming down on the quarterback with his full weight.

"That's probably another rule change that could occur," Addazio said on Monday as he turned his attention to Saturday's game against Florida State. "They are trying in the NFL to really protect the quarterbacks at a high level, and I get that. They take a lot of tough shots."

Boston College (7-3, 4-2 Atlantic Coast Conference) fell five spots to No. 22 in the AP Top 25 after losing 27-7 to second-ranked Clemson. Brown was hurt on the first series and transported to the hospital.

Addazio said it was a freak injury and did not blame Wilkins or think he was trying to injure the BC quarterback.

"By no means any ill intent or anything like that," Addazio said of Wilkins, who he said reached out to get in touch with Brown. "It was just guys trying to play hard and part of the game, but I think that's a piece that we can help."

Addazio said the NCAA has done a good job protecting players, commending the rules against targeting and cut blocks and ones that have eliminated some of the injuries on kickoffs. The NFL this year began penalizing defenders who land on the quarterback, but the inconsistent application of the new rule has led to criticism.

"It will be controversial early, just like the targeting rule is," Addazio said. "And nothing is perfect, but I think these are all things that we can grow with to make the game safer."

Backup EJ Perry finished the game for the Eagles. Addazio said Brown was day-to-day and would not rule him out for the game against the Seminoles.

Addazio said Clemson coach Dabo Swinney texted him after the game and also said Wilkins wanted to get in touch with Brown.

"That was really terrific that they did that," Addazio said. "It speaks who they are. I think it's good for college football and these are good people."