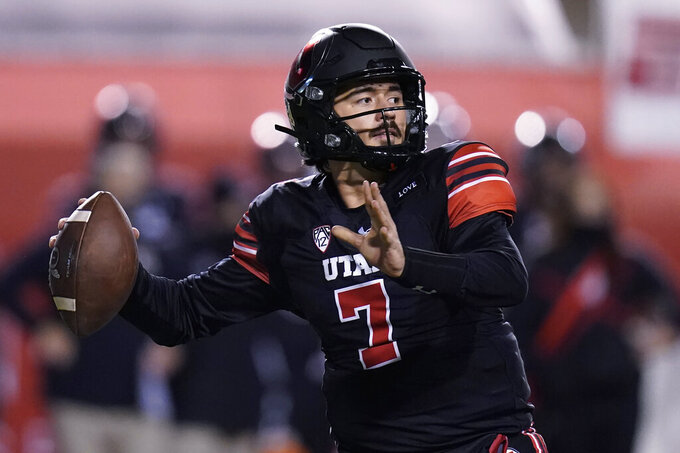 FILE - Utah quarterback Cameron Rising looks for a receiver during the first half of the team's NCAA college football game against Southern California in Salt Lake City, in this Saturday, Nov. 21, 2020, file photo For the second straight year, the Utes entered fall camp undecided on who will be the starting quarterback. The battle to lead the offense has turned into a two-man race between Baylor transfer Charlie Brewer and redshirt sophomore Cameron Rising. (AP Photo/Rick Bowmer, File)

SALT LAKE CITY (AP) — For the second straight year, the Utah Utes have entered camp undecided on who will be the starting quarterback.

The competition to lead the offense has turned into a two-man race between Baylor transfer Charlie Brewer and redshirt sophomore Cameron Rising. No discernible gap exists between the two so far.

The intense competition puts Rising in familiar territory. He battled Jake Bentley for the top spot a year ago after Bentley joined the program as a graduate transfer from South Carolina.

Rising was named the starter ahead of the 2020 season opener against USC. He played only briefly against the Trojans, throwing for 45 yards and an interception before suffering a season-ending shoulder injury.

Rising sat out spring practices entirely while recovering from surgery.

“It was just a little dose of reality,” Rising said. “It happened. It is what it is, and you just got to make the most of that situation.”

Bentley took over following Rising’s injury but Whittingham benched him in the season finale against Washington State after ineffectual play. He transferred to South Alabama after the season.

Brewer took his place in the quarterback room.

His experience and past success appealed to the Utes. Brewer started 39 games over four seasons at Baylor and led his team to the 2019 Sugar Bowl. He threw for 9,700 yards and 65 touchdowns for the Bears, while also adding 1,039 yards and 22 TDs on 452 carries. The senior ranked first in career completions (828) at Baylor and was second in completion percentage (.635), career passing yards, and career touchdown passes.

“I’ve played in a lot of games,” Brewer said. “I’ve started a lot of games. I know what it’s like to play in big games. Then again, I have to come to a new school and prove it again.”

Brewer has impressed coaches with how quickly he grasped the playbook after enrolling in school at the start of the year. It has been a significant adjustment for him compared to the offense he ran at Baylor.

While the Bears ran a spread offense the bulk of the time, Utah throws multiple looks at defenses. That means going under center, going in motion and isolation plays, and other offensive concepts less familiar to Brewer.

Still, he likes where he’s at.

“The terminology is completely different from what I came from,” Brewer said. “But it’s been really good since January learning it. I feel like I have a really good grasp on it.”

Rising is in a good spot as well.

He suffered no setbacks or complications during his shoulder rehabilitation. Rising was able to pick up where he left off last season once he was cleared to participate in camp.

“I was able to hit all my marks when I wanted to, sometimes even a little early,” Rising said. “I was on a smart pace because there’s nothing you can do to accelerate the recovery process. It was overall a great process. I’m glad I got through it and I’m glad I’m done with it now.”

Utah may not publicly name a starter before it opens the season against Weber State on Sept. 2. Regardless of who wins out, the new starting quarterback will have several experienced receivers and an experienced offensive line to lean on as he settles into the role.

“This team is stacked pretty much from top to bottom,” Rising said. “I’m excited for this team. It’s going to be a great year for sure.”