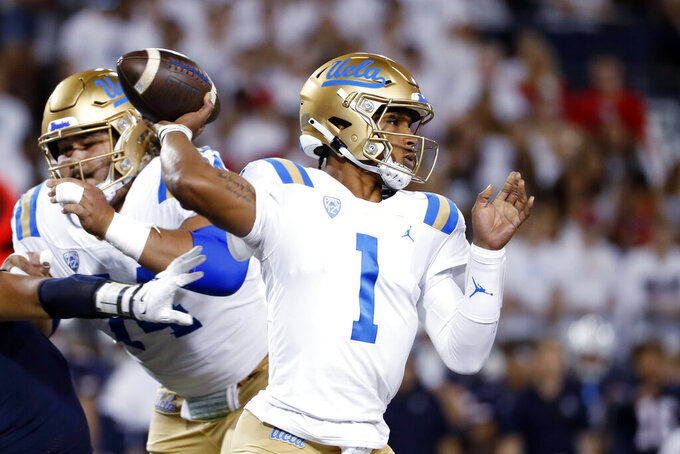 UCLA quarterback Dorian Thompson-Robinson (1) throws a pass during the first half of the team's NCAA college football game against Arizona on Saturday, Oct. 9, 2021, in Tucson, Ariz. (AP Photo/Chris Coduto) 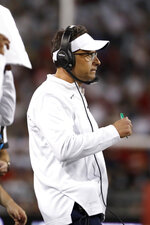 TUCSON, Ariz. (AP) — Brittain Brown burst up the middle, lost his footing and planted his hand in the ground to keep his balance. Barely breaking stride, he kept going for a 48-yard touchdown.

Disappointing he had lost a fumble earlier in the game, Brown scored the back-breaking touchdown that sealed UCLA's victory.

Brown ran for 146 yards and scored a touchdown in the fourth quarter, Dorian Thompson-Robinson accounted for three touchdowns and UCLA extended Arizona's school-record losing streak to 17 games with a 34-16 victory Saturday night.

“Coming off the bad play that I had, I was feeling some type of way about that,” said Brown, who fumbled in the third quarter. “I knew once I got the ball, I was going to punch it whatever play coach called.”

UCLA (4-2, 2-1 Pac-12) relied on its ground game early as Thompson-Robinson struggled to find the mark and Brown sealed the victory with a 48-yard touchdown in the fourth quarter.

Thompson-Robinson was limited to 82 yards passing, but ran for two scores and threw for another. Zach Charbonnet rounded up UCLA's strong night on the ground with 117 yards.

“We did what we had to,” UCLA coach Chip Kelly said. “We finished them off.”

Arizona (0-5, 0-2) struggled in the red zone after moving the ball well against the Bruins and lost quarterback Jordan McCloud to a right leg injury in the fourth quarter.

The Wildcats scored one touchdown in six trips across midfield — three in the red zone — and McCloud was in tears as he was helped off the field after getting twisted up in a sack.

“Emotionally, it hurts,” Arizona coach Jedd Fisch said. “I think there was a little bit of a deflation there.”

Coming off a 42-23 loss to Arizona State the Bruins went to the ground early against Arizona.

UCLA had 165 yards rushing by halftime and Thompson-Robinson had a hand in two touchdowns. He threw a 3-yard TD pass to Chris Dulcich in the first quarter and scored a 2-yard run in the second to put UCLA up 14-6.

Thompson-Robinson started to hit a few passes in the second half, setting up a 4-yard keeper that put UCLA up 24-16. Brown put the game out of reach by bursting up the middle for his 48-yard score.

“That was our plan all along,” Thompson-Robinson said.

The Wildcats have shown signs that their losing streak might come to an end soon and were coming off a bye week.

They had the Bruins on their heels early with their up-tempo offense, marching down the field throughout the first half.

Finishing drives continued to be a problem.

The Wildcats, 124th nationally in red-zone efficiency, had to settle for two field goals after reaching UCLA's 9- and 20-yard lines. A third drive ended at UCLA's 28 on a failed fourth-and-1.

A trick play finally got the Wildcats into the end zone. McCloud threw a back pass to Jamarye Joiner, who then hit Michael Wiley for a 10-yard TD to pull Arizona within 14-13 at halftime.

Arizona reached UCLA's 15 on its opening second-half drive, only to settle for another field goal, thanks to a penalty for blocking below the waist.

Then McCloud went down and so did the Wildcats' chances.

“It was tough to see Jordan go down like and the turnovers as well, but end of the day we've got to keep fighting," said Arizona receiver Boobie Curry, who had six catches for 43 yards.

UCLA racked up 337 yards rushing and buckled down on the Wildcats defensively in its own end of the field to avoid losing to a team that hasn't won since 2019.

McCloud got his first start at Arizona last week and was sharp against UCLA.

The South Florida transfer ran the offense well and made good decisions, throwing the ball away numerous times instead of taking sacks or forcing throws. He finished with 182 yards 21-of-30 passing.

Fisch said he did not know the extent of McCloud's injury, but didn't expect it to be short-term.

UCLA plays at Washington next Saturday.

Arizona is at Colorado next Saturday.