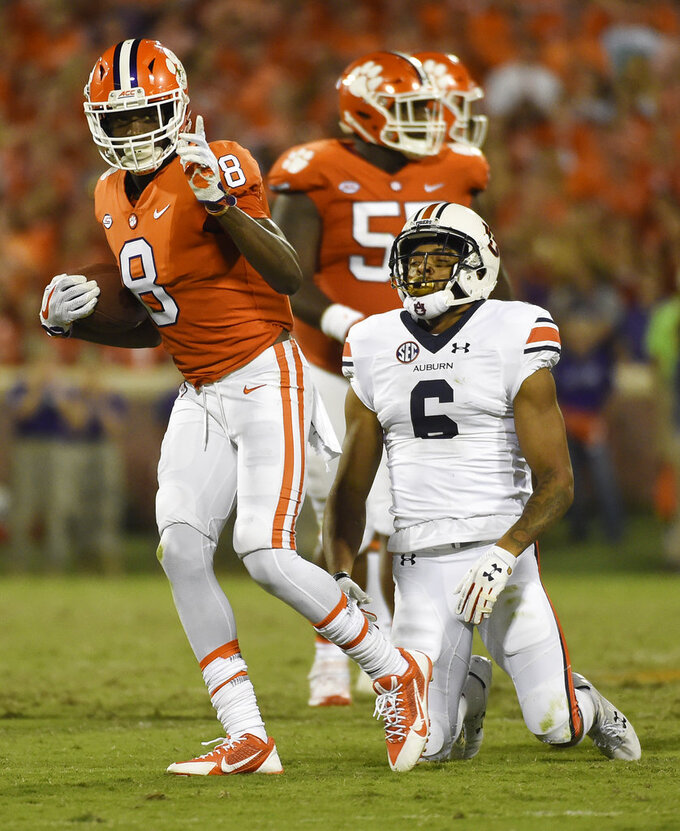 CLEMSON, S.C. (AP) — Clemson's new starting quarterback had an easy way for the third-ranked Tigers to keep winning the next several years — recruit more Bryants. Kelly Bryant, Clemson's first-year starter, ran for two touchdowns after a scary hit knocked him to the ground and defensive end Austin Bryant had four of the Tigers' 11 sacks in a 14-6 victory over No. 13 Auburn on Saturday night. "The Bryant guys were pretty good," said Kelly, who's not related to Austin. "We've got to keep it going." If they do, the defending champion Tigers (2-0) might be playing in their third straight title game. The game was hyped as an early season test of power between two of the country's best teams with hopes of the College Football Playoffs. But Clemson's defense showed its strength early before Kelly Bryant got the offense rolling right before halftime. Bryant, facing his first Power Five opponent after sitting behind two-time Heisman Trophy finalist Deshaun Watson the past two years, went down hard on a tackle by defensive lineman Dontavius Russell. Bryant lay on the ground motionless before his legs flapped around, looking to most of the 80,000 at Death Valley that he was hurt bad. Instead, Bryant just needed to regain his breath and find his resolve. Once Bryant returned, he led an 88-yard drive right before halftime that he ended with a 3-yard scoring run to give Clemson the lead for good 7-6. "That drive," Clemson coach Dabo Swinney said. "Was a thing of beauty." Just as pretty was Bryant's play coming out of the break for a 79-yard TD drive. This time, Bryant had a spinning, 27-yard run to the end zone. Austin Bryant and the defense made sure that was all Clemson would need. The defensive Bryant was nearly unblockable much of the night, chasing Stidham all over the field. Stidham brushed it off. "I've been hit hard before," he said. "We'll bounce back." The Auburn Tigers finished with 117 yards overall and just 13 on the ground. Stidham's longest throw was a 23-yarder to Nate Craig-Myers on Auburn's opening drive. Austin Byrant sacked Stidham on Auburn's final two plays as the Baylor transfer desperately tried to get the ball downfield. Byrant threw for 181 yards on 19-of-29 passing. He also rushed for 68 yards. "Football players are tough-minded people," Austin Bryant said. "This just shows we were the most prepared team." And how about those Bryants? "We like to tell people we're cousins," Austin said. "We'll probably keep doing it." THE TAKEAWAY: AUBURN: Auburn must find a way to get its offense going and it must start with the offensive line. Jarrett Stidham was continually chased all over the field by Clemson defenders, who registered seven sacks. "Obviously, we wanted to come out here and win this ballgame," Stidham said. "We didn't execute. (Auburn's) defense had one heck of a game. We've just got to come out and help them more." CLEMSON: Clemson still has some issues to work out on offense. The Tigers' running game struggled to get going and the team made too many mistakes in keep drives going. But Clemson's defense did as advertised, shutting down Auburn until its offense with its bevy of new skill players (Byrant at QB, Milan Richard at tight end, C.J. Fuller at tailback and receivers Deon Cain and Ray-Ray McCloud as starters) grow more comfortable playing together. INJURIES: Auburn played without tailback Kerryon Johnson, who nursed a hamstring injury all week after getting hurt last Saturday against Georgia Southern. ... Clemson was minus starting safety Van Smith who had a knee sprain. POLL IMPLICATIONS: Look for Clemson to move up to No. 2 with Ohio State's loss to fifth-ranked Oklahoma. Auburn is most likely in for a big slide after failing to score a touchdown against Clemson. HE SAID IT: Clemson coach Dabo Swinney on his team's play after trailing 6-0 much of the opening half. "The heart I saw on display, the will to win. It was awesome to see." UP NEXT Auburn as one last game before Southeastern Conference play starts, taking on Mercer at home on Sept. 16. Clemson starts Atlantic Coast Conference play with perhaps its toughest remaining test, at No. 17 Louisville next Saturday. ___ More AP college football: http://collegefootball.ap.org and http://www.twitter.com/AP_Top25