Carey introduced as Temple coach, a place he "wants to be" 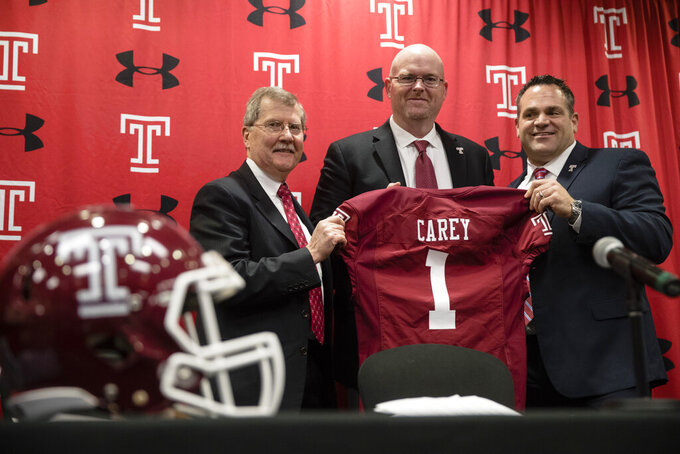 It was just 29 days ago that Kraft and the university welcome Miami defensive coordinator Manny Diaz as the replacement for Geoff Collins, who left for Georgia Tech after two years at Temple. But that changed quickly after Hurricanes coach Mark Richt unexpectedly retired on Dec. 30. Some 12 hours later, Diaz had a five-year deal with Miami, and the Temple job was vacant again.

Temple started a new search that officially ended Friday with the hiring of Carey from Northern Illinois. Kraft said the parameters of the search didn't necessarily change, but a wider net was cast than the previous search, and being a head coach was a little more important this time around.

"Every search has its own personality," Kraft said. "No matter if it was 17, 18, 20, 30 days before, you have to re-evaluate yourself. You have to look at what's the right person for this time in this program. We took our time to find our coach. We wanted someone who truly understood North Philadelphia and truly understood who we were. Someone who wanted to be here. ... Someone who saw who we are and who we can be.

"We were looking for a proven winner. Someone who has a track record of winning and winning the right way."

Carey coached in parts of seven seasons at Northern Illinois, leading the Huskies to six bowl games (all losses) and compiling a 52-30 record. He was the 2013 Mid-American Conference coach of the year and won two MAC championships, including a 30-29 win over Buffalo in this season's title game.

In terms of finding someone who "wanted to be here," Carey appears to fit Temple's need.

"This is exactly where I want to be," the new coach said. "I told Dr. Kraft as we were going through this whole thing, I said, 'Put whatever buyout you want on it. I don't care.' That's not important to me. What's important to me is I want to be here. I've said no other times. This is the right time and the right place."

Carey, who took over at NIU before the Orange Bowl at the end of the 2012 season, said it wasn't awkward being the second head coach hired in less than a month.

"They always made me feel like I was the guy they wanted," he said. "I've been this guy before. I was the third head coach in three years at NIU. Yes, I was the offensive coordinator for two of those years, but the guys on defense didn't know me."

The 47-year-old Carey started his college coaching career as a graduate assistant at Minnesota in 1998.