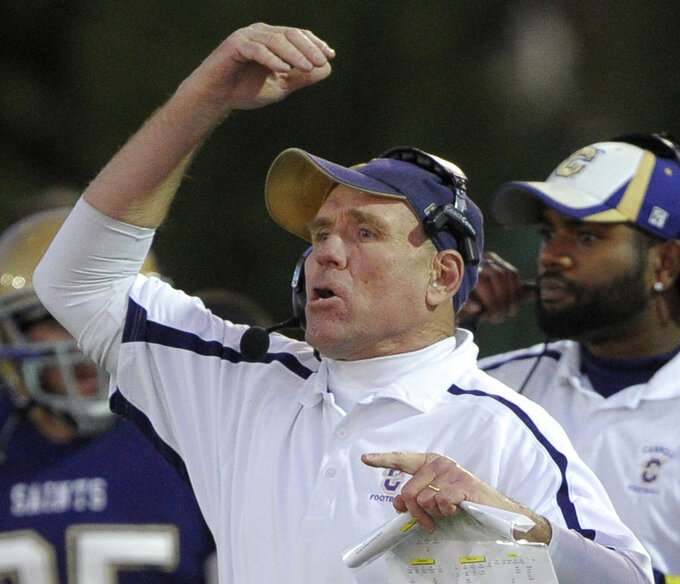 More recently, however, the Saints have struggled through four consecutive losing seasons with a combined record of 17-24, including a 5-6 record this season.

"I just think this program needs a new voice," Van Diest said during an emotional press conference. "I need to step aside and let somebody else enjoy Carroll College like I've had a chance to enjoy it."

Van Diest, a Montana native who played football at Wyoming, recalled how he decided he wanted to be a coach while attending a Carroll College game with his dad in 1975.

"I left at halftime because I couldn't stand not being a part of the game. It was really hard," Van Diest said. "I said, 'Dad, I want to coach.'"

He's been doing so for 43 years, and will be inducted into the NAIA Hall of Fame in January.

But after years of watching the parents of Carroll players travel to watch their sons play, Van Diest said he wanted to be able to take in more of his son Clay's hockey games during his senior season at St. Norbert College in Wisconsin.

"And we have a granddaughter that I want to go see in St. Louis," where his son, Shane, lives, he said.

"That's going to mean a lot to me, to get to spend time with them," he said. "Because I can't turn back the clock on what I missed, but I can certainly go forward and help and support them in their life."

Van Diest thanked his current and former players, assistant coaches, his wife Heidi and people associated with Carroll who recommended he be hired in 1998. He succeeded another NAIA Hall of Fame coach, Bob Petrino, who posted a 163-90-2 record in 28 seasons. Petrino died this summer.

Carroll President John Cech said that while Van Diest is a coaching legend, he also has been an integral part of his players' lives. Van Diest and his wife plan their summer weekends around the weddings of former players, Cech said.

"Coach Van Diest has always emphasized the role of football in building strong, ethical young men who are loyal friends and family members and great students as well as committed athletes," Cech said. "He leads by example. He connects with athletes, not just as players, but as people."

Athletic director Charlie Gross said he hopes to have a new coach on board by mid-December.

Van Diest acknowledged he doesn't have a lot of interests outside of family and football.