Charbonnet has 3 TDs in UCLA debut as Bruins rout Hawaii 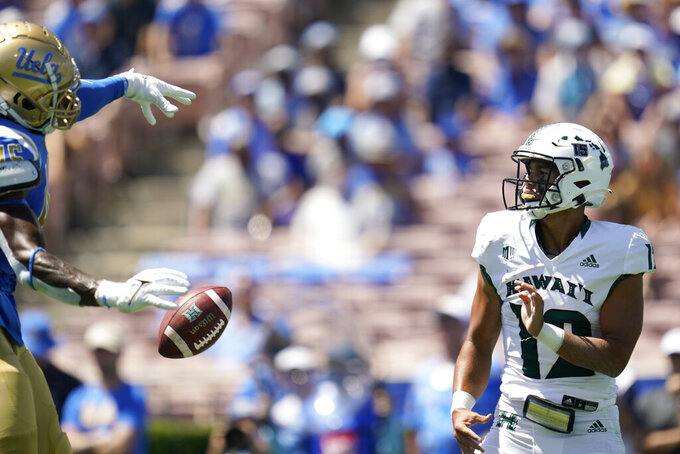 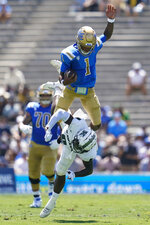 PASADENA, Calif. (AP) — The mother of UCLA quarterback Dorian Thompson-Robinson echoed the thoughts of many Bruins fans during the first half of Saturday's game against Hawaii after Zach Charbonnet scored his third touchdown.

Melva Thompson-Robinson tweeted “Thanks @UMichFootball” as Charbonnet rushed 106 yards in his UCLA debut and the Bruins rolled to a 44-10 season-opening victory at the Rose Bowl.

Charbonnet — who was at Michigan the past two seasons before transferring — also became the first Bruins back since Johnathan Franklin in 2012 to run for three TDs in a season-opener.

“My line put me in great situations when I did have an opportunity,” Charbonnet said. "It allowed us to be one-on-one defenders, and that’s all as a running back you can ask for.”

UCLA scored on its first five possessions and roared out to a 31-3 halftime lead as it snapped an eight-game losing streak to nonconference teams dating back to 2017. It is also the first time that Chip Kelly has won an opener in four seasons as UCLA's coach.

“We’re just excited as a team. I thought our kids played with great energy," Kelly said. “There is an idea with what you think you can do in all three phases of the game (coming into the season), but until you actually play another opponent, you’re not sure.”

Charbonnet scored UCLA's first touchdown midway through the first quarter on a 21-yard run after great blocks from the right side of the offensive line to extend the lead to 10-0.

The junior's best run of the day came with 47 seconds remaining in the first quarter when he broke four Hawaii tackles before turning on the speed for a 46-yard touchdown to make it 24-3. He then went over 100 yards on his sixth carry with a 21-yard score on the next possession.

Charbonnet wasn't the only UCLA back to fare well against the Rainbow Warriors. Brittain Brown added 78 yards on 13 carries as the Bruins rushed for 244 yards and averaged 5.7 yards per carry.

“They run angry, and we love that as an offensive line," lineman Jon Gaines II said. "To be able to have the opportunity to get them to the second and third level and see what they can do, it’s a great experience for us.”

Brown also reached the end zone. His 1-yard TD with 6:06 remaining in the first quarter made it 17-0 four plays after defensive lineman Datona Jackson picked off Chevan Cordeiro's pass deep in Hawaii territory.

Dorian Thompson-Robinson was 10 of 20 for 130 yards. He completed all four of his passes on the opening drive of the second half, culminating in a 44-yard strike to Kazmeir Allen to make it 37-3.

Hawaii's lone touchdown came late in the third quarter on a 1-yard pass from Cordeiro to Caleb Phillips. Cordeiro was 24 of 46 for 216 yards.

“No excuses. We just played poorly. We played poorly, we coached poorly, and we got beat by a team that was better than us today,” Hawaii coach Todd Graham said. "But we made ’em look a lot better by playing very poor.”

Hawaii's Matthew Shipley had a career-long, 48-yard field goal in the first quarter, but he had two critical errors on punts.

After the Rainbow Warriors went three-and-out on their opening drive, Shipley's knee hit the ground as he fielded the snap, allowing the Bruins to take over at the Hawaii 15.

In the third quarter, Ale Kaho blocked Shipley’s punt and it was recovered by David Priebe in the end zone for UCLA's final TD. Hawaii came into the game with the nation's longest streak without a blocked punt at 154 games.

It was UCLA's first blocked punt since 2016.

A 12:30 p.m. late August kickoff and students not reporting to UCLA’s campus until later next month didn’t translate to a huge crowd.

The game had an announced attendance of 32,982, which is the second-lowest for a UCLA game since the Bruins moved to the Rose Bowl in 1982. The record low remains 32,513 against Oregon State in 1992.

Hawaii: Calvin Turner Jr. came into the game as the nation’s leading returner in career all-purpose yards (4,359 yards), but the senior all-purpose back was held to 50 yards on five receptions.

UCLA: Kelly said the one thing he likes about having Brown and Charbonnet is that both are physical three-down backs.

“It’s comforting to know there is not much of a transition between either of those guys. Brittain and Zach are very similar in terms of body types and the types of runs that they can do. When you play the schedule that we play, where you need to have multiple running backs, I was very happy with how those guys played today.”

Hawaii: Hosts Portland State on Sept. 4. It will be the Rainbow Warriors' first home game on campus after Aloha Stadium was shuttered at the conclusion of last season.

UCLA: Hosts No. 16 LSU on Sept. 4 in the first meeting between the two programs.