Cincinnati climbs CFP mountain, but can it stay there? 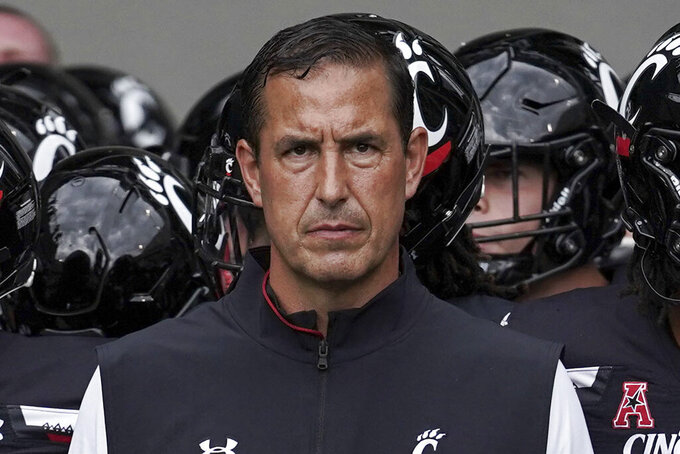 FILE - Cincinnati head coach Luke Fickell prepares to take players onto the field prior to an NCAA college football game against Miami (Ohio) Saturday, Sept. 4, 2021, in Cincinnati. For Cincinnati (13-0), a member of the second-tier American Athletic Conference, the planets aligned. The Bearcats landed as the No. 4 seed in the CFP, invading the domain of college football's blue bloods. (AP Photo/Jeff Dean, File)

CINCINNATI (AP) — The University of Cincinnati has played football for more than a century in the long shadow of Ohio State.

After all these years, little brother is making some big noise.

For Cincinnati (13-0), playing in the under-the-radar American Athletic Conference, everything fell into place in 2021. The Bearcats landed as the No. 4 seed in the College Football Playoff, crashing what has been the domain of college football's blue bloods, the first school outside a Power Five conference to do so.

Meanwhile, back in Columbus, Ohio State fans are still working through the grief of last month's disastrous loss to Michigan, which to many was worse than being shut out of the playoff for the first time in three seasons.

The Bearcats scaled the CFP mountain and can see the top from there.

Now fifth-year coach Luke Fickell has to figure out how to keep the Bearcats up there as the program prepares to transition to a Power Five conference — the Big 12 — in the next few years.

“When I came here, a mindset of mine was, ‘I hope someday, that we could become a rival to my alma mater,’" said Fickell, who played at Ohio State and was on its coaching staff for 16 years.

“I mean that, all of the sudden, maybe they look at you and recognize that they have to battle against us,” he said. “Whether we play them on the football field or not, a lot of the other opportunities are in recruiting. That’s where we continue to want to be — and that’s not just the Ohio State stuff. That’s being a top-10 program.”

Cincinnati has a well-earned national reputation as a basketball school. But it could never compete with the tradition, fan base, facilities and recruiting advantage of the juggernaut Buckeyes.

It has, however, had enough football success in the past two decades to become a mid-major stop on the coaching ladder for the likes of Mark Dantonio, Brian Kelly, Butch Jones and presumably Fickell, though he has spurned opportunities to leave.

Urban Meyer, the former Ohio State coach, suggested the trajectory of the Cincinnati program could depend on how the Bearcats show against No. 1 Alabama on New Year’s Eve with 25 million people watching on TV.

“It can be that double-edged sword,” Meyer said. A competitive game boosts the profile of the program; a blowout looks bad and raises doubts about whether the Bearcats belonged.

"There is a lot of responsibility at Cincinnati to go perform well," said Meyer, who was fired as the Jacksonville Jaguars coach last week. “It is great for them.”

Curiously enough, Cincinnati and Ohio State, 100 miles apart, have never been football rivals. They’ve played each other just 17 times, with the Bearcats winning twice — in 1896 and 1897. The last time they met was in 2019, when the Buckeyes sent Fickell and the Bearcats back to the bus with 42-0 loss. The schools once went nearly 70 years without a gridiron clash.

Cincinnati football fandom is regional, closer to Ohio's six Mid-American Conference schools than Ohio State, which a few years ago tried unsuccessfully to trademark the word “The” as in “The Ohio State University.”

Century-old Nippert Stadium on the UC campus has undergone some major renovations in recent years but still seats only around 40,000. (That's smaller than any in the current Big 12.)

Fickell built his 2021 team around seniors and transfers who will be gone next season, including quarterback Desmond Ridder, running back Jerome Ford (an Alabama transfer) and most defensive starters. Sustaining the success will be challenging, but Fickle has prioritized recruiting and building for the future.

“They’ve got a top-five team — they’re a ways away from having a top-five program, and that’s what Ohio State is,” said Jim Kelly, a former Bearcats player and radio analyst for more than three decades.

“Yeah, they will have some growing pains with some new kids, but they’re making strides and truly are ahead of where they were five years ago (when Fickell arrived), in every aspect," Kelly said.

Buckeyes fans will keep an eye on the Cincinnati game before settling in to watch No. 7 Ohio State's consolation game, a Rose Bowl matchup with No. 10 Utah on New Year's Day.

Things will get more interesting if the Bearcats beat two-touchdown favorite Alabama, and No. 2 Michigan takes down No. 3 Georgia.

“In a perfect world, Michigan and Cincinnati would play each other in the national championship game — let the coaching sparks fly! — with Fickell getting the best of Jim Harbaugh,” columnist Rob Oller wrote in The Columbus Dispatch. “That might even make Buckeye Nation happy, despite being on the outside looking in.”