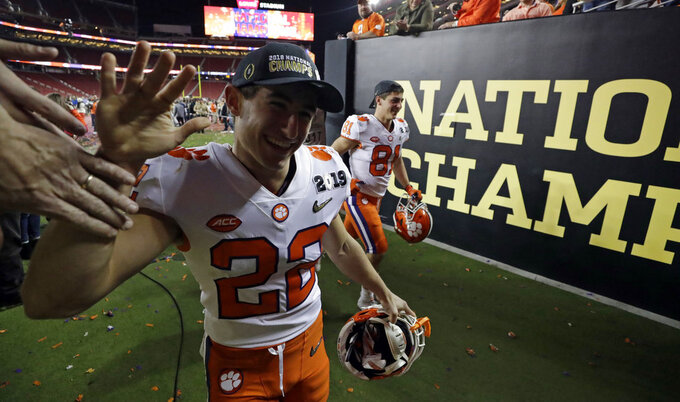 SANTA CLARA, Calif. (AP) — Clemson finished No. 1 in The Associated Press poll for the third time after routing Alabama in the national championship game.

The Tigers received all 61 first-place votes. The Crimson Tide, which was trying to become just the third team to go wire-to-wire as the No. 1 team in the country, finished second. Clemson beat Alabama 44-16 in the College Football Playoff national championship Monday night. Clemson also finished No. 1 in 2016 and 1981.

LSU was sixth and Southeastern Conference rivals Florida and Georgia were tied for seventh.

Texas was ninth, its best final ranking since 2009 when the Longhorns finished second after losing to Alabama in the BCS championship game.

No. 10 Washington State finished as the highest-ranked Pac-12 team for the first time in the history of the conference. There were more Mountain West teams (three) than Pac-12 (two) in the last rankings.

UCF finished 11th after having its 25-game winning streak snapped in the Fiesta Bowl by LSU. No. 12 Kentucky finished with its highest ranking since 1977 when the Wildcats were No. 6. No. 15 Syracuse was last ranked in the final poll in 2001, when the Orange were 14th.

No. 21 Northwestern became the first team to start the season 1-3 and finished ranked since Miami did it in 1995.