Clemson's Swinney: Getting treated like he has the 'plague' 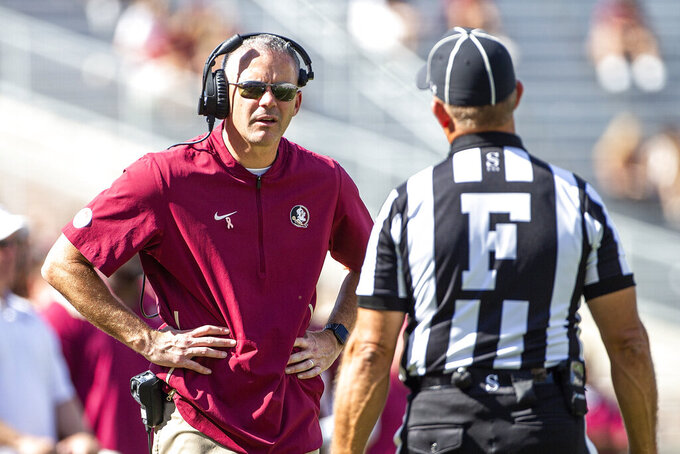 CLEMSON, S.C. (AP) — Clemson coach Dabo Swinney sees normally friendly faces avoiding his gaze around town. He also is getting plenty of “praying for you” texts and random letters in his mailbox, some from people he has never met.

That's what happens when a national football championship contender is struggling to stay above .500.

The six-time defending Atlantic Coast Conference champions have already lost two league games and will need significant help — plus improved play — if the Tigers hope to keep that streak going.

It's a very different experience for fans of the program. Though Swinney said he's not worried.

“It's like you got a stink on you and nobody wants to be around you,” he said this week. “We are going to be fine, I promise you.”

Swinney hopes Clemson (3-2 Atlantic Coast Conference) shows that Saturday against a revived Florida State (3-4, 2-2). The Seminoles went through an 0-4 September where coach Mike Norvell's short tenure was already being debated by fans.

But Florida State enters with three straight victories and a growing confidence that things are turning the corner.

The teams have been heading in varying directions the past month. Clemson the runaway favorite this summer to once more win the ACC title and advance to the College Football Playoff — both for the seventh straight times.

Florida State had a disastrous opening month of defeats, including an unlikely, last-minute home loss to FCS opponent Jacksonville State. The calls for Norvell's job were loud with many Seminoles pleading to hire College and NFL Hall of Famer and Jackson State coach Deion Sanders.

But Norvell's quelled much of fire with this three-game win streak, its first in four years.

“This is a good football team across the board that is way better than their record, that’s for sure," Swinney said.

Some other things to watch when Florida State plays Clemson:

Clemson coaches spent the week evaluating who'll start at quarterback after starter D.J. Uiagalelei's spotty showing in a 27-17 loss to Pitt last week. Swinney said he will look at everything Uiagalelei and backup Taisun Phommachanh do in practice before deciding who will open.

Uiagalelei has started all seven games. He was expected to be heir apparent to Trevor Lawrence, but is 99th nationally in completion percentage and 128th with just four passing TDs.

Clemson coach Dabo Swinney said he's talked with Florida State's Mike Norvell several times since 2020 when the Seminoles canceled their home game with the Tigers due to a Clemson player testing positive for COVID-19. An angry Swinney accused the Seminoles using the illness as an excuse to get out of the game. Swinney, when asked if he'd buried the hatchet, quipped, “I never knew there was a hatchet.”

Clemson will honor Florida State's two-time national championship coach Bobby Bowden, who died earlier this year. The Tigers will also honor Bowden's son, Tommy, who coached Clemson from 1999 until midseason 2008 when Swinney took over as interim. Swinney was hired by Tommy Bowden as the Tigers receivers coach.

Clemson took another hit to its running back rotation when leading rusher Kobe Pace was ruled out because he's in COVID-19 protocol. The Tigers and first-year running backs coach C.J. Spiller have had to handle upheaval each week in trying to make up for the production of NFL first-rounder Travis Etienne.

Experienced backs Lyn-J Dixon and Michel Dukes have entered the transfer portal since the season began and have left the team. And highly regarded freshman Will Shipley missed two games with a fractured tibia before returning last week at Pitt.

It's hard to imagine a Florida State-Clemson matchup where both teams are unranked. That's only happened twice in the past 30 meetings, in 2009 and 2010. The teams have also combined to win 23 of the past 30 ACC titles, starting with Clemson's championship in 1991. Florida State last won the ACC crown in 2014 while the Tigers have won the past six titles.