College Football Picks: Fall cupcakes are back in the South 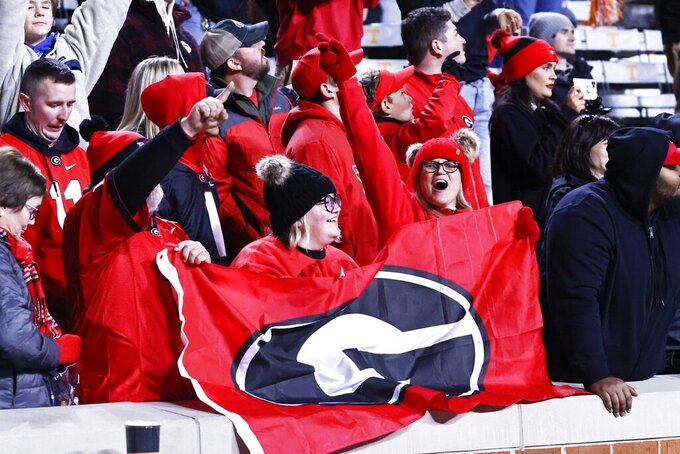 While most of the country breaks out the sweaters and fleece jackets to embrace fall, down in the South you can still find hints of summer — on the football schedule.

Charleston Southern at No. 1 Georgia. Prairie View at No. 16 Texas A&M. Outside the AP Top 25, New Mexico State is back in Southeastern Conference country, visiting Kentucky a week after playing at Alabama. Louisiana-Monroe is at LSU.

The SEC may have started this fall cupcake trend — is there a Pumpkin Spice University — but the Atlantic Coast Conference has gotten in on it, too.

Clemson hosted UConn last week and North Carolina will tune up for its Thanksgiving weekend rivalry game against North Carolina State by playing Wofford this Saturday.

The majority of Power Five teams play at least one nonconference game per season against a team they know they can roll. Usually those teams come from the very bottom of the FBS or from the wide choice of options in the FCS.

Sometimes it backfires on the big boys. See: Florida 70, Samford 52. But strategically working in a glorified scrimmage so late in the season, when championships are on the line, will always feel like gaming the system.

There already are signs the eventual expansion of the College Football Playoff will encourage more aggressive scheduling. The cupcake games probably will never go away for good, but here's hoping they can at least be limited to the first two months of the season.

The picks, with lines from FanDuel Sportsbook. And we'll pass on some of those cupcakes:

So much attention on Cincinnati trying to make the playoff, but the Cougars have to be thinking New Year's Six bowl if they can win out ... HOUSTON 34-23.

Here's to the Rebels, who snapped a 14-game losing streak and have now won two straight games, both by two touchdowns ... SAN DIEGO STATE 27-15.

Razorbacks have lost 14 straight to the Crimson Tide since Nick Saban arrived in Tuscaloosa ... ALABAMA 34-17.

Oddsmakers remain more skeptical of the Ducks than poll voters and the CFP selection committee ... OREGON 31-28.

Spartans will need another Heisman-worthy game from RB Kenneth Walker III to keep up with the Buckeyes ... OHIO STATE 45-28.

Sandwich game for the Wolverines between come-from-behind win at Penn State and The Game against Ohio State ... MICHIGAN 38-21.

Wildcats quietly have won four straight and have a shot to get to nine wins ... BAYLOR 27-24.

Demon Deacons need one victory in their last two games to lock up the ACC Atlantic; No gimme ... CLEMSON 28-26.

Roadrunners can clinch a spot in the C-USA title game against the reigning champions ... UTSA 21-17.

Badgers have won seven straight meetings, only two of which were one-score games ... WISCONSIN 34-17 BEST BET.

Cavaliers QB Brennan Armstrong (ribs) was held out against Notre Dame in hopes of getting him back for this game that could decide the ACC Coastal ... PITT 38-28.

Florida (minus 9 1/2) at Missouri — @Stevencalcutt

Nittany Lions have won 14 straight against the Scarlet Knights, who really want to turn this into a rivalry game ... PENN STATE 24-13.