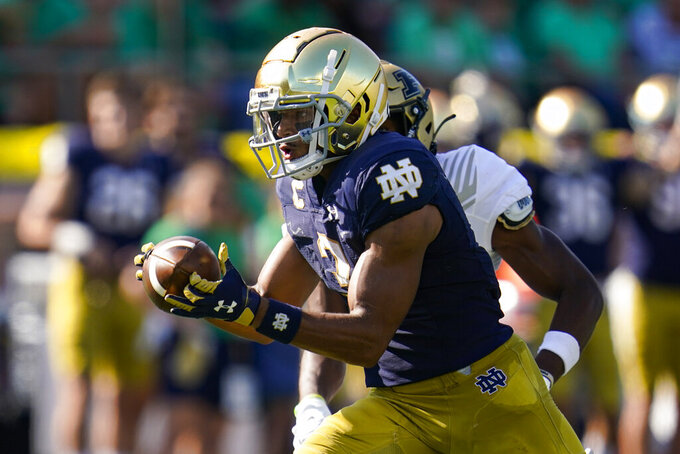 Notre Dame wide receiver Avery Davis (3) makes a catch on his way to a touchdown against Purdue during the second half of an NCAA college football game in South Bend, Ind., Saturday, Sept. 18, 2021. Notre Dame defeated Purdue 27-13. (AP Photo/Michael Conroy)

Good teams. Great setting. Entertaining game. What college football is all about.

This week, not so much.

The weekend's two matchups of ranked teams — No. 12 Notre Dame vs. No. 18 Wisconsin and No. 7 Texas A&M vs. No. 16 Arkansas — are both being played at NFL stadiums a long way from campus.

The Irish and Badgers are playing the back half of a two-game series that was supposed to start last year with a game at Lambeau Field in Green Bay, Wisconsin. Lambeau is a unique experience in sports. Taking advantage of an opportunity to play a big college game there makes sense.

Soldier Field has some history, but it's not quite the same. It is a good spot for both schools' fans to converge.

Still, it would be far more fun if this game was in Madison, Wisconsin, or South Bend, Indiana.

As for Texas A&M and Arkansas, the Southeastern Conference rivals have been playing at the home of the Dallas Cowboys since 2009 with a few exceptions — including last year when it was moved to College Station, Texas, because of the pandemic.

The contract with AT&T Stadium runs through the 2024 season. Both schools have said they would like to get that game back on campus.

The neutral site game is not going away in college football. They provide some value in recruiting and brand building and they can be fun road trips for players, who get to play in NFL stadiums.

But the more games on campus the better.

QB Jake Haener became a late-night star in the upset of UCLA and the Bulldogs have staying power ... FRESNO STATE 42-10.

Coming off a scare at Florida, this was probably not an enjoyable week of practice for the Crimson Tide. Uh-oh, Golden Eagles ... ALABAMA 52-3.

Ducks RBs CJ Verdell and Travis Dye have combined for 4,846 yards rushing in their careers, most of any active duo in the FBS... OREGON 38-7.

Sooners remain the only Big 12 team West Virginia has not beaten since joining in 2012; time is running out on the Mountaineers ... OKLAHOMA 38-21.

Breakout coming for the Tigers' sluggish offense? They have won eight straight against the Wolfpack ... CLEMSON 31-17, BEST BET.

Cougars have yet to trail in three games while winning by an average of only nine points ... BYU 38-14.

That bad loss in the opener at Illinois might be obscuring some real improvement by the Huskers ... MICHIGAN STATE 27-24.

Tigers return home from Happy Valley for another cupcake .. AUBURN 42-17.

After nearly getting shut out in their opener, the Cardinal have scored 83 points in the last two games ... UCLA 31-24.

Mustangs snapped a seven-game losing streak in the Battle for the Iron Skillet last season ... TCU 34-28.

Flames and Orange have split the first two games of the three-game series ... SYRACUSE 24-23.

Missouri (minus 1 1/2) at Boston College — @mikeblewitt

Kentucky (minus 4 1/2) at South Carolina — @Davidhopson

Wildcats have won six of the last seven against the Gamecocks ... KENTUCKY 31-23.