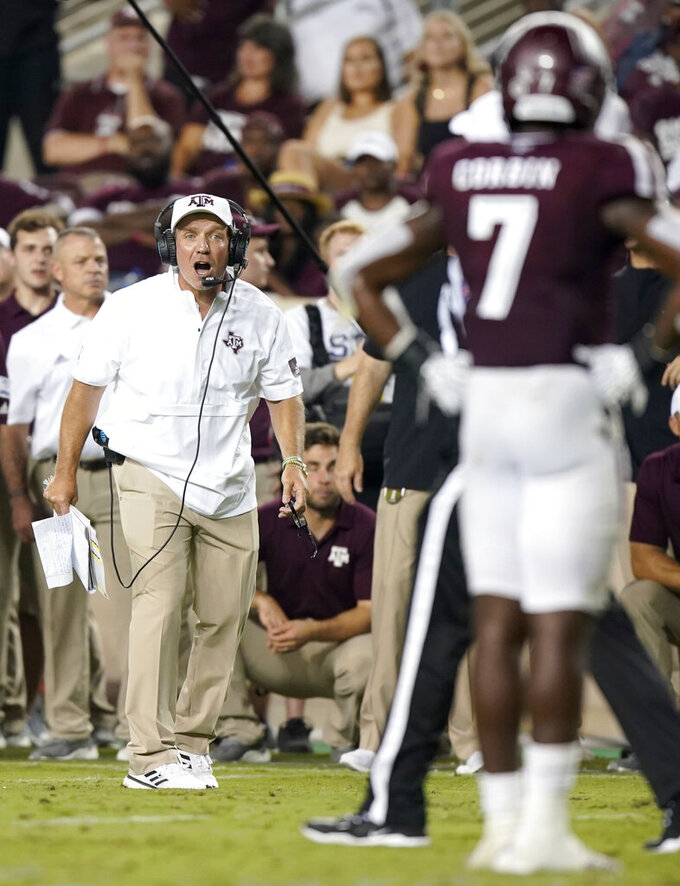 Texas and Texas A&M don't play anymore. The best their fans can do is compare resumes since the split, gloating about their team's successes and basking in the failures of their rival.

There has been more basking then gloating.

This weekend, the Aggies and Longhorns play in college football's biggest games. No. 12 Texas A&M visits No. 1 Clemson and No. 9 Texas hosts No. 6 LSU. It's a prime opportunity for fans of the estranged rivals (who are so over each other!) to assess which program is winning the breakup.

Since the Aggies joined the Southeastern Conference, leaving the Big 12 and Longhorns behind, they are 60-31, peaking in Year 1 with Heisman winner Johnny Manziel leading A&M to an 11-2 season that included a victory at Alabama, a Cotton Bowl win over Oklahoma and a final ranking of No. 5.

The Aggies have not broken nine wins since, but optimism is high in coach Jimbo Fisher's second season.

That's an OK run, but compared to Texas, it has been high times in College Station.

The Longhorns are 50-40, with three losing seasons since A&M left. Last year's 10-4 breakthrough season under coach Tom Herman was the high point, including a Sugar Bowl victory against Georgia and a final ranking of No. 9.

Advantage, Aggies. Both programs seem to be trending in the right direction, but Saturday's games will be measuring sticks — in part against each other.

Excluding a couple losses to independent BYU, the Broncos have not lost a regular-season nonconference game to a team outside a Power Five conference since 1999 ... BOISE STATE 35-21, BEST BET.

When they played last year in College Station, QB Trevor Lawrence did not start for Clemson and WR Justyn Ross hardly played ... CLEMSON 42-21.

The Green Wave is not quite a walkover for the Tigers after an emotional victory ... AUBURN 41-17.

The Bears upset the Huskies in a defensive struggle last year ... WASHINGTON 27-10.

Could be another stat stuffer for Badgers RB Jonathan Taylor ... WISCONSIN 45-7.

The Spartans will need to muster a little more offense against a WMU team that can move the ball ... MICHIGAN STATE 34-20.

This has looked like it could be a tricky spot for the Orange and odds makers obviously agree ... SYRACUSE 28-27.

No. 23 Stanford (plus 1) at Southern California

Possible battle of backup quarterbacks in the annual early Pac-12 tone-setter for Cardinal and Trojans ... USC 23-20.

Tommie Frazier and Kordell Stewart aren't walking through that tunnel, but the former Big 8 and Big 12 rivals played a thriller last year in Lincoln. Maybe they can repeat it in Boulder ... COLORADO 31-28.

BYU (plus 3½) at Tennessee — @BrandonOCook

Miami (minus 4½) at North Carolina — @JeffMiles9

Minnesota (minus 3) at Fresno State — @JEMicklos

The Gophers handed the Bulldogs one of only two losses last season ... MINNESOTA 24-23.

Arkansas (plus 6½) at Mississippi — @ARKgolfguy3