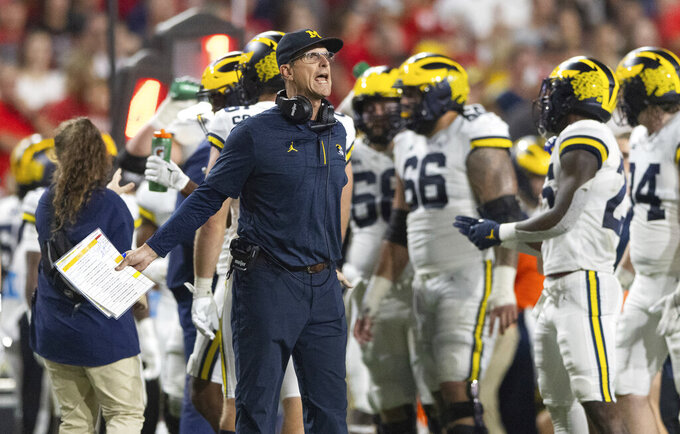 Michigan coach Jim Harbaugh yells to officials during a timeout in the first half of an NCAA college football game against Nebraska on Saturday, Oct. 9, 2021, in Lincoln, Neb. (AP Photo/Rebecca S. Gratz)

The Midwest is in the spotlight on the weekend before the College Football Playoff releases its first rankings with a couple ranked matchups and another game pitting two of the best defenses in the country.

No. 20 Penn State took some of the luster off the Big Ten's big weekend by losing a nine-overtime stalemate to Illinois last week, but the Nittany Lions will still be the best team No. 5 Ohio State has faced since losing to Oregon.

C.J. Stroud and the Buckeyes have the nation's best offense at 49.3 points per game and 8.44 yards per play but their primetime showdown comes hours after the main event kicks off in East Lansing, Michigan.

No. 6 Michigan and No. 8 Michigan State are both 7-0 heading into their first top-10 matchup since Bump Elliott was leading the Wolverines and Duffy Daugherty was roaming the sideline for the Spartans in 1964.

There is a big game in the West Division, too.

No. 9 Iowa, which hasn't played since being upset by Purdue, visits Wisconsin. Despite their struggles, the Badgers (4-3) are still very much in control of their road to the Big Ten championship game. The game matches two top-10 defenses and two offense that are ... limited.

Chants looking to rebound from their first regular-season loss since 2019 ... COASTAL CAROLINA 48-24.

After a grinder against Navy, Bearcats get back to the blowouts ... CINCINNATI 45-17.

Texas Tech fired coach Matt Wells earlier this week with Red Raiders a victory away from bowl eligibility, but the toughest part of the schedule still ahead ... OKLAHOMA 45-24.

Buckeyes have scored at least 50 in four straight games; the only Big Ten team to have five straight 50-plus games was Michigan in 1903 ... OHIO STATE 35-20.

The 36 1/2 points total from the bookmakers is the lowest on the schedule this week by four points; This game should be played in the snow for the full #B1G effect ... WISCONSIN 18-15.

Just when folks start getting excited about the Panthers, things tend to go sideways; How about this time? ... PITT 28-20.

Tigers have won five straight meetings, but they have yet to score 20 points in regulation against an FBS team ... CLEMSON 24-14.