Colorado looks to get back on track against Oregon State 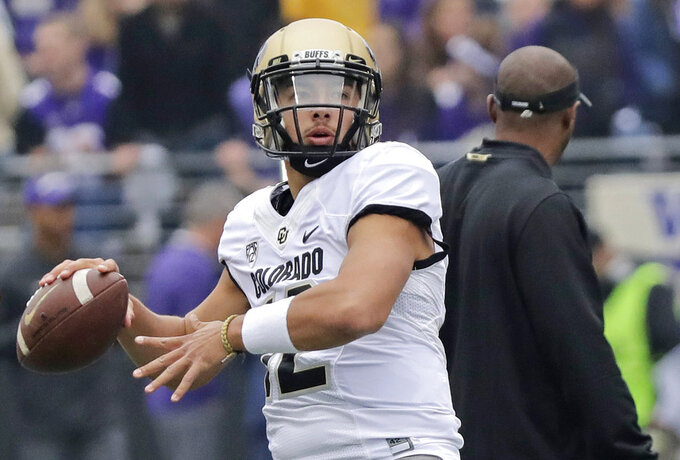 Now, the desperate times: The Buffaloes (5-2, 2-2 Pac-12) try to get back on track against Oregon State (1-6, 0-4) on Saturday . Colorado has a chance to become bowl eligible for the second time under coach Mike MacIntyre and stay in the Pac-12 South title chase.

Usually, MacIntyre refers to November contests as "gold games," because they're heightened. For this one, he flipped the calendar early.

"We've got to basically run the table," said MacIntyre , whose team remains in striking distance in the South with every team having at least two division losses. "We're excited about having this opportunity to get going and we do feel like we have a chance. Almost everybody in the Pac-12 South thinks they have a chance."

The Beavers remain the only team in the Pac-12 without a conference win.

"You continue to tell them the truth that this league is tough and there are some good players in this league and good coaches in this league, and so it's tough to win" coach Jonathan Smith said. "Then you encourage them and tell them like you appreciate their effort and keep working, we're searching as coaches for better answers for them and we're in this thing together."

To brush up on the Beavers this week, the Buffaloes went back through old practice film. It's as good of way as any to prepare for Oregon State offensive coordinator Brian Lindgren, who was with the Buffaloes from 2013-17 and makes his return on homecoming.

"We've been going back looking at stuff he used to do in practice, everything, all of his old trick plays and all the stuff he's ran before," MacIntyre said. "I know he'll pull some of those out."

Colorado is hoping to have standout receiver Laviska Shenault back on the field after he sat out the Washington game with a toe injury. Shenault has 60 catches for 780 yards and six TDs this season. He also has another five scores out of the backfield.

"Everyone in this room knows that Laviska is probably the best receiver in the country, and maybe one of the best athletes in the whole country as well," Colorado quarterback Steven Montez said. "When he's not on the field, it's not good for us, but we have some young guys that can come in and make plays and execute while Laviska is out. We have young guys who have the potential to do great things for this offense. It's all going to come down to execution."

That and finding their focus despite losing in successive weeks at USC and Washington.

"It's kind of like being backed into a corner and the only way you are getting out of there is to come out swinging," Montez said.

Things to know as the Buffaloes try to win their fourth straight over the Beavers:

TURNOVER MARGIN: Montez and the offense have limited their mistakes to five interceptions and one fumble. That's tied for the fifth-fewest turnovers in the nation.

HIGH PRAISE: Montez reflected fondly on his time with Lindgren running the offense. "He helped me get super comfortable with our offense," Montez said. "He engrained the playbook into my mind to where I was always thinking about it. He is obviously a great man as well. He is a great human being. It was good to get to know him and get to know what type of person he is."

TALENTED TAILBACK: Oregon State running back Jermar Jefferson has rushed for 899 yards and 12 touchdowns this season. The school rushing record for a true freshman is 1,253 yards set by Jacquizz Rodgers in 2008. "He is so powerful and explosive," MacIntyre said of Jefferson, who was limited last weekend with a hamstring strain. "He can kind of freeze (the defense) and give them that stiff arm and explodes away."

LINKS: In the 1964 game between Colorado and Oregon State, the Buffaloes had a quarterback/defensive back complete 2 of 4 passes for 21 yards. His name was Hale Irwin and he'd go on to win three U.S. Open titles on the golf course.