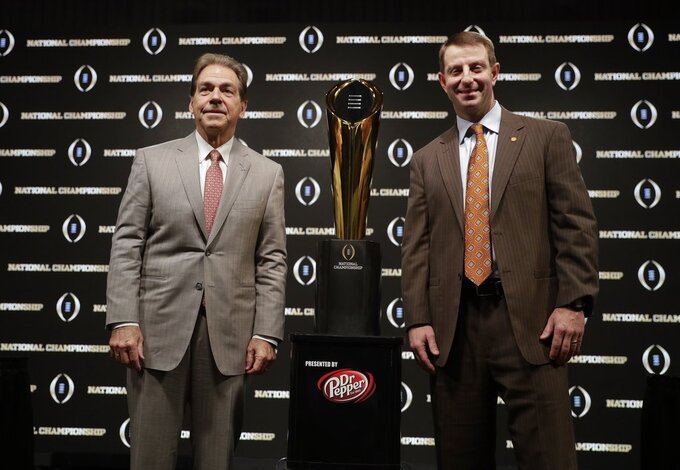 SAN JOSE, Calif. (AP) — The downtown streets were soaked and largely empty. Extra police officers loitered at the intersections, but they mostly just talked among themselves. On the weekend before one of the country's biggest sporting events, the host city appeared to have hit the snooze button.

This shouldn't be a surprise.

For some reason, the College Football Playoff took its national championship game to Silicon Valley.

Maybe if a bunch of gamers were settling the title on a computer screen, it would all make sense. But since this is an actual football game, contested by two teams from the opposite side of the country, it's hard to understand why the powers-that-be decided on the Bay Area (technically, San Jose and Santa Clara) as an appropriate spot for the fifth edition of their championship extravaganza.

Simply put, college football is no big deal in this part of the world.

One game — even a really big game between the nation's two most dominant programs, Alabama and Clemson — isn't going to change that reality.

The result is an event that felt more like an afterthought, at least in the buildup to Monday night's showdown at Levi's Stadium.

"We had the stated goal when we started the College Football Playoff, which was to move the game around," said CFP guru Bill Hancock, trying to put a positive spin on things. "Take top-level championship college football to every part of the country, including here."

Those motives are admirable, but this game needs to be played in areas that actually care — really, really care — about college football.

That's no knock on the good folks of Northern California. If you're craving a good Pinot, you've come to the right place. If you're looking for some of nature's most spectacular creations, it's hard to go wrong in these parts. If you dig a laid-back vibe where most anything goes, this is essentially Nirvana.

That was quickly apparent when one flipped on the local newscasts. Less than 48 hours before the title game, at least two stations didn't even mention it during their sports segments. Instead, they focused on a 3-point shootout involving the reigning NBA champion Golden State Warriors, NFL playoff games, and a plethora of college basketball throughout the sprawling metro area.

The game will go on, of course, and no one tuning in from afar is likely to notice much of a difference — unless the rain, which drenched San Jose throughout the weekend and led to the cancellation of a concert Sunday night, hangs around long enough to muck up the newly laid turf at the stadium in nearby Santa Clara.

The high-tech home of the NFL's San Francisco 49ers is a major reason the game was awarded to the Bay Area. Opening in 2014 as a replacement for decrepit Candlestick Park, it quickly hosted a Super Bowl and became the annual home of the Pac-12 championship game.

"This is a brand-new, world-class stadium," Hancock said. "We like to be able to have our athletes play in a place like that. And those players, they'll all remember that they got to play at Levi's Stadium."

But the Pac-12 championship has provided ample evidence of the disinterest that prevails in this part of the country when it comes to college football. Last month, the upper deck was tarped off for the title game between Washington and Utah, which was played before an announced, clearly padded crowd of 35,134 — roughly half the stadium's capacity. In actuality, the turnout was probably somewhere between 20,000 and 30,000, roughly in line with what you might expect for a high school championship game in Texas or the Deep South.

Throughout its now five-year run at Levi's Stadium, the Pac-12 title game has never come close to selling out, even when local favorite Stanford made a couple of appearances.

For those who might point to Stanford's success in recent years as a sign that college football is a prominent part of the local fabric, folks who actually live here are quick to counter that the Cardinal has a downright puny fan base when compared to pro teams such as the Warriors, the 49ers and baseball's San Francisco Giants. This season, the team averaged less than 38,000 fans per game, failing to sell out any home games at its 50,424-seat stadium.

The next five national championship games have already been handed out, all to cities that have much more of a college football heritage than the Bay Area. New Orleans in 2020. Miami in 2021. Indianapolis in 2022. Los Angeles in 2023. Houston in 2024.

He said it will probably be another two or three years before the selection committee begins considering bids for 2025 and beyond. At the moment, there is no desire to take the game to an open-air venue in the northern U.S., which would eliminate the chance of following the NFL's lead by, say, awarding a championship game to the New York City area.

They don't care about college football in the Big Apple, either.

The next round of selections should bring some duplicate selections. Atlanta deserves a repeat after hosting Alabama's thrilling overtime victory against Georgia a year ago. New Orleans, Dallas and Miami should be part of a regular rotation. To maintain geographic balance, Phoenix and Los Angeles are logical candidates. Maybe even consider an occasional foray to Big Ten country, as long as it's domed stadiums in Indianapolis or Detroit or perhaps Minneapolis.

It should be one and done.