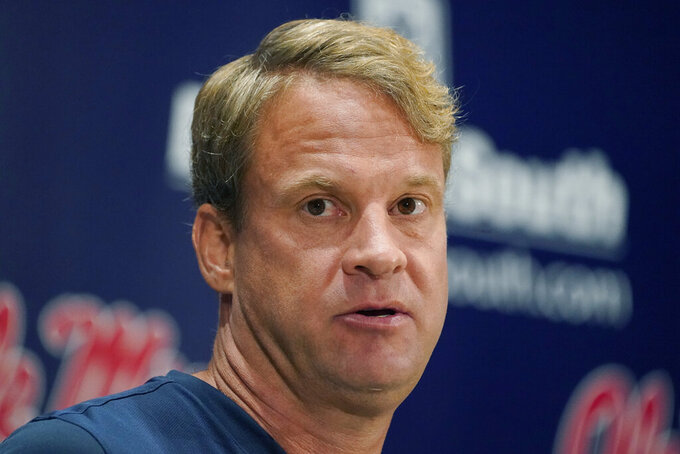 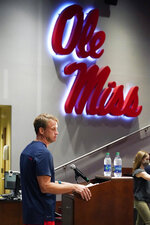 The dichotomy in Mississippi is striking.

The state has one of the lowest COVID-19 vaccination rates in the country. Its hospitals are on the verge of being overwhelmed by those stricken with the potentially deadly disease.

Yet, in the face of all that discouraging news, the flagship university’s football team is fully vaccinated — all 240 coaches, players and staff.

It will be intriguing to see just how much influence coach Lane Kiffin and his Ole Miss players have on those who have been reluctant to embrace, even in the face of overwhelming scientific evidence, their best defense against the coronavirus pandemic.

That goes for the entire Southeastern Conference, the country's mightiest football league and one that, in normal times, wields enormous influence in its neck of the woods.

“Going out and talking about it ... is one thing,” Kiffin said during an appearance this week on MSNBC's “Morning Joe” talk show. “But when a team, an entire organization — not just the players — decides to do this at 100%, I would like to think that's pretty eye-opening for a lot of people that were sitting right on the edge or not really motivated to do it.

“I bet our numbers go up,” he went on to prognosticate. ”That's pretty cool."

Those numbers have nowhere to go but up.

According to data compiled by the Mayo Clinic, just 42.7% of Mississippi residents have received at least one dose of a COVID-19 vaccine. Only one other state (Idaho at 42.1%) has a lower vaccination rate.

This is especially disheartening news as the highly contagious Delta variant sweeps the country, driving new cases, hospitalizations and deaths to levels approaching the dark days of the pandemic back in January — when vaccines were not yet widely available.

Mississippi is hardly alone, especially in its part of the country, in having a wide swath of the citizenry express a baffling opposition to vaccines that have proved amazingly effective in reducing both infection rates and, more important, the chances of getting seriously ill.

All across the SEC's 11-state footprint the anti-vax movement is strong.

Florida, Kentucky, Texas and Missouri are the only SEC states with vaccination rates above 50%. The remaining seven have yet to reach even that modest threshold, even though vaccines are free and pretty much available now on every street corner.

The numbers are especially troubling when one considers the example being set by the powerhouse football programs in those states.

The Georgia Bulldogs say more than 90% of their players are fully vaccinated, while Alabama coach Nick Saban reported recently that his team was closing in on that number. Saban also has made PSAs urging Alabamians to get vaccinated.

“We feel really comfortable where we are,” Georgia coach Kirby Smart said at the start of preseason practice. "My goal as always is to be 100%. I think it’s the safest thing for our players.”

While many programs have returned to business as usual, that's not the case at Georgia. For example, the Bulldogs have yet to open practices to the media and are still conducting all interviews by the safety of Zoom.

“I would not say it is back to normal because it is not exactly normal,” Smart said. “There are spikes going on across the country, in our state, in our hospitals systems across the Southeastern Conference. It is scary. We are being extremely smart, making good decisions with our players."

Behind the scenes, Georgia is also mindful that, even with such a high vaccination rate among its players, the virus is not to be trifled with.

“We feel confident that we are able to get a little closer at times in some meeting rooms, but we are trying to be smart about that,” Smart said. “You are only as good as your last COVID test.”

These coaches have selfish reasons for goading their teams to get vaccinated, of course.

With the pandemic raging again and the start of the season just weeks away, vaccines are the best defense against schools having to forfeit games — and possibly ruin any championship hopes — because they don't have enough healthy players to take the field.

The SEC has already announced that forfeits — not postponements or cancellations, like last season — are on the table if COVID-19 disrupts the season.

The PAC-12 joined that stance this week.

At Ole Miss, Kiffin and his staff tried to set an example for the players by getting the jab. They also brought in outside doctors to address the concerns of those who were worried about possible side effects or expressed concern about the safety of the vaccines.

“We did not make anyone do anything,” Kiffin stressed. “Our coaches and our entire staff did it awhile back, so that our players knew how important it was. We weren't going to tell them, advise them what's the best thing to do, if we didn't do it ourselves.”

He knows that embracing the vaccine has its own possible side effects in a state where anti-vax resentment is so fierce.

But here's hoping that Ole Miss — and other SEC schools — are able to steer their states in the right direction. Lives, literally, are depending on it.

“Obviously, we would love for everyone to be vaccinated who comes to games,” Kiffin said. “I know it's controversial to say, but it's the right thing to do.”

It shouldn't be controversial.

Paul Newberry is a sports columnist for The Associated Press. Write to him at pnewberry(at)ap.org or at https://twitter.com/pnewberry1963 and check out his work at https://apnews.com/search/paulnewberry