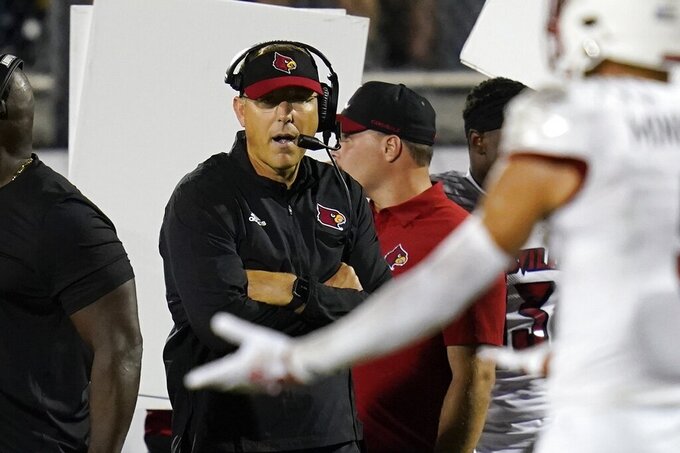 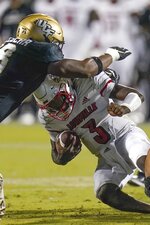 ORLANDO, Fla. (AP) — Malik Cunningham used his arm and his legs to get Louisville’s season on track.

The redshirt senior quarterback threw for 195 yards and rushed for 121 more, including a 43-yard scoring run in the third quarter, to lead Louisville to a 20-14 victory over UCF on Friday night.

”(Running) just opens up another dimension of our offense,” Cunningham said. “We have great running backs and to add my legs and my arm to that...it’s something we’ve been doing the last three years.”

Louisville coach Scott Satterfield said he told Cunningham that he was going to lean on him heavily against UCF.

“I had to let Malik be who he is,” Satterfield said. “We didn’t really let him loose last week and that’s on me. This week we let him play his game.”

The Cardinals (1-1) outscored the Knights 13-0 in the second half. Tiyon Evans rushed for 75 yards and a touchdown and Tyler Hudson had three catches for 67 yards.

“To win the way we did was great,” Satterfield said. “It was tough, it was hard fought and our defense played outstanding. Central Florida is a great program and they have won a lot of games here.”

UCF (1-1) scored touchdowns on two of its first three possessions, but struggled to get much going the rest of the way. The Knights had their best scoring chance with 2:52 remaining in the fourth quarter but quarterback John Rhys Plumlee was intercepted in the end zone by Jarvis Brownlee on a fourth-and-goal from the 5.

“It’s not the end of the world as far as our season is concerned,” Knights coach Gus Malzahn said. “But it feels like crap right now.”

Plumlee was 16-for-34 passing for 131 yards and rushed for 83 yards, but he was sacked four times. Isaiah Bowser rushed for 51 yards and two touchdowns.

“That’s on me,” Malzahn said. “We’re an undisciplined football team.”

PICKING EACH OTHER UP

Louisville defensive lineman Jermayne Lole missed Friday’s game with an injury and is expected to miss the rest of the season. Cardinals defensive coordinator Bryan Brown said the rest of the defensive line wanted to honor him with a strong performance. “They saw one of their brothers went down and that inspired them,” Brown said. “This is a close group and they play for each other.”

Brownlee, a transfer from Florida State, got inside position on Knights wide receiver Jaylon Griffin and fought him for the football while remaining inbounds. “We knew that they were going to come out with something tricky,” Cardinals safety Kenderick Duncan said. “We just executed. Jarvis knew where he needed to be and he did his job.”

Cunningham has made 37 consecutive starts, a school record for quarterbacks ... UCF lost at home for just the third time in the past 34 games ... Louisville has scored in 267 straight games.

Louisville: The Cardinals recovered from a poor effort in a 31-7 loss to Syracuse last week. Cunningham wasn’t perfect, but showed a lot of toughness and leadership in guiding the offense to 421 yards. Louisville wants to be a threat in the ACC and now has some momentum going into next week’s home opener against Florida State.

UCF: The Knights need to address their inconsistencies on offense and that starts with Plumlee. The Ole Miss transfer is a threat with his legs, but once Louisville’s defense adjusted and forced him to throw from the pocket he could not deliver. It’s a disappointing result for a team that was hoping to run the table.

Louisville: The Cardinals will host Florida State next Friday.

UCF: The Knights are at Florida Atlantic next Saturday