Cy-Hawk showdown among 7 Big 12 games vs. other Power 5s 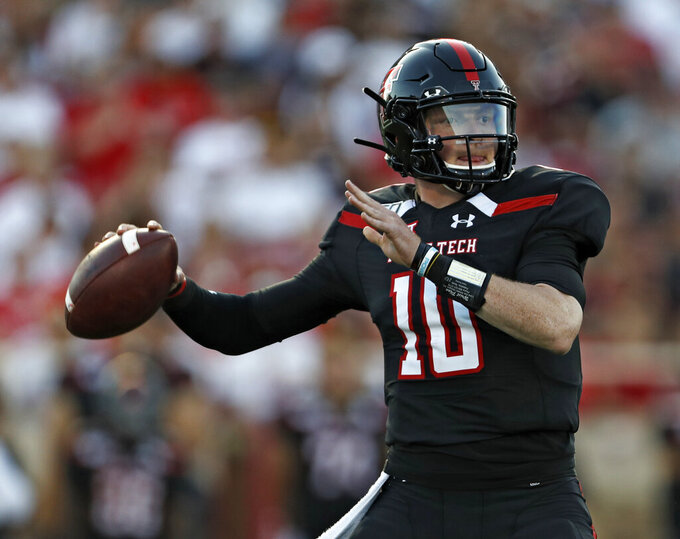 Texas Tech's Alan Bowman looks for a receiver during the first half of the team's NCAA college football game against UTEP on Saturday, Sept. 7, 2019, in Lubbock, Texas. (Brad Tollefson/Lubbock Avalanche-Journal via AP)

Some things to watch in the third weekend of the Big 12 Conference schedule:

Iowa St. vs. No. 19 Iowa in the annual Cy-Hawk showdown. The 67th game in the instate rivalry was so close to being the first with both teams ranked, but Iowa State (1-0) slipped to the first spot out of this week's Top 25 after an open date last weekend. It is still the most anticipated game since the series resumed in 1977, a year before the Cyclones were last ranked in the AP preseason poll until this season. Iowa State dropped four spots to No. 25 after opening with a triple-overtime victory over Northern Iowa. The Hawkeyes have won the last four games in the series, and lead 44-22 overall, but their edge is only 11-10 the past 21 meetings. Iowa State has won seven home games in a row since the start of last season to match the school record.

Kansas State defense vs. Mississippi State running back Kylin Hill, the SEC and Power Five leader with 320 yards rushing the first two games. The Wildcats are eighth nationally allowing only 208 total yards per game, but get their first true test after limiting Nicholls and Bowling Green to only 14 combined points. In the Bulldogs' 31-10 win at K-State last year, Hill ran 17 times for 211 yards and two scores, and caught a 16-yard TD.

Seven Big 12 teams are playing teams from other Power Five conferences; five of those games are on the road. ... Fifth-ranked Oklahoma (2-0) goes to UCLA (0-2) with the nation's longest current true road game winning streak. Their 20 in a row since October 2014 is twice as long as UCF's 10 for the next longest streak. ... TCU's game at Purdue will be the Horned Frogs' first game in Indiana since a 21-0 loss at Notre Dame in October 1972. ... The 13 points allowed by Texas Tech are the fewest in its first two games of a season since 1998. ... Oklahoma State (2-0), which goes to Tulsa, has a 12-game winning streak in non-conference games. ... West Virginia has only 64 yards rushing in two games, ranking 129th out of 130 FBS teams. The Mountaineers are last with 1.14 yards per carry, and join Akron and South Florida as the only teams without a rushing touchdown.

Texas Tech sophomore quarterback Alan Bowman has completed 71 of 99 passes for 713 yards with five touchdowns and one interception in the first two games. The Red Raiders are at Arizona, which has allowed 519 total yards (404 passing) and 43 points a game.