Dana Holgorsen back home to coach University of Houston 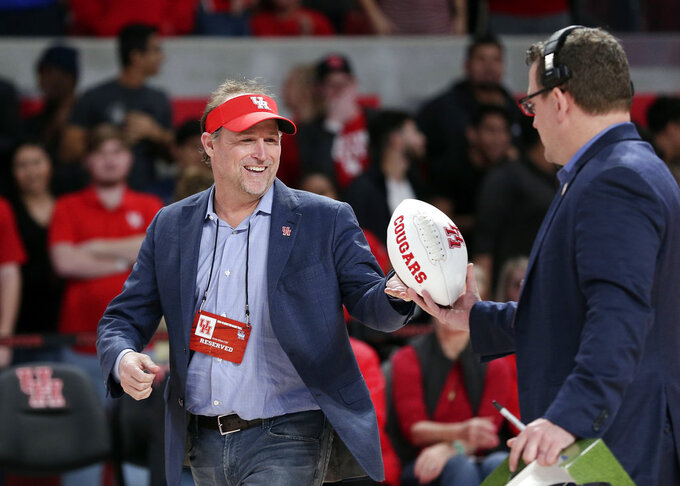 Dana Holgorsen, the newly named football coach for the Houston college football team, gets autographed footballs to toss to the crowd as he is recognized during halftime of an NCAA college basketball game between Tulsa and Houston on Wednesday, Jan. 2, 2019, in Houston. (AP Photo/Michael Wyke) 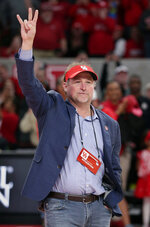 HOUSTON (AP) — Dana Holgorsen is back at the University of Houston.

"It's great to be home," Holgorsen said Thursday at his introductory press conference.

Holgorsen left West Virginia to return to Houston, where he was offensive coordinator from 2008-09.

"When I left here 10 years ago, I left here with a frown," Holgorsen said. "Because, one, I was going to Oklahoma (State), but two, I just loved this city and this university so much. Obviously, things worked out OK."

It was a swift coaching search for the Cougars after firing Major Applewhite on Sunday following his second season.

"We felt like it was time to take it to the next level," University of Houston Board of Regents Chairman Tilman Fertitta said. "We wanted somebody that had the leadership skills to win a lot of games."

The 47-year-old Holgorsen left West Virginia after eight seasons. He was 61-41 with the Mountaineers, leading them to eight bowl games.

The move takes Holgorsen from the Big 12 to the American Athletic Conference.

"I really don't think a whole lot about it," Holgorsen said. "What my job is is to make wherever I'm at the best I can make it. Let's not forget I did transition a team that was a non-Power 5 school."

In the past four seasons, the Cougars have posted a 37-15 record.

Those are the types of seasons Holgorsen expects the Cougars to return to.

"There's so much to look forward to," Holgorsen said. "The future is extremely bright. I am honored to be here, I am excited to be here. This is not a stepping stone, I've been there and done all that. I'm excited about making this place great and winning championships here and enjoying this great city and this great university."