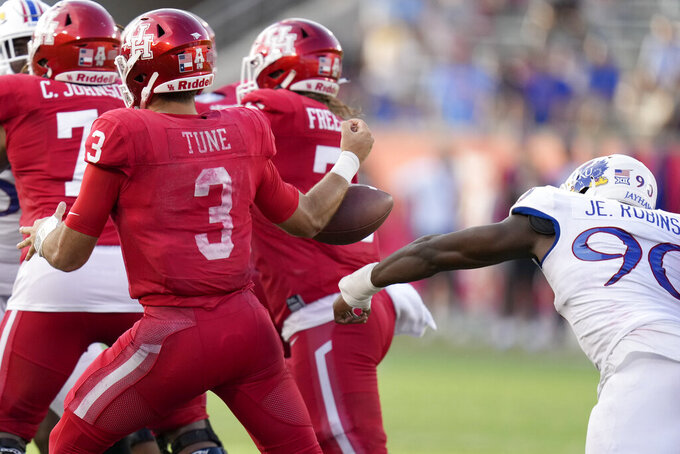 HOUSTON (AP) — Jalon Daniels threw for 158 yards and three touchdowns and rushed for 123 yards and two scores as Kansas improved to 3-0 for the first time since 2009 with a 48-30 win over Houston on Saturday.

“I thought Jalon was excellent today,” Kansas coach Lance Leipold said. “He made some big plays, scrambling, keeping drives alive, saw some things, didn’t hesitate. Statistically, he probably didn’t get off to a great start, but I think again, a very solid day.”

“We have a lot of people who are able to make plays with the ball in their hands in our offense,” Daniels said. “I feel like (offensive coordinator Andy Kotelnicki) realizes that, so I feel like he does a great job of being able to put guys in situations to be able to get the ball.”

Kansas finished with 438 yards, including 280 rushing yards. The Jayhawks won back-to-back road games for the first time since 2007.

“It’s huge for this program,” Leipold said about the undefeated start. “It’s huge for these players for everything they’ve gone through, the ones who have persevered through it all.”

“There’s plenty of blame to go around,” Houston coach Dana Holgorsen said. “I got out-coached. … We got out-coached offensively, defensively. Put it on me. We have a lot of work to do.”

Kansas: The Jayhawks started slow but couldn’t be stopped for the final 3½ quarters. Kansas continued to excel on third downs finishing 7 of 12 after entering 17 of 23, which leads the nation. The Jayhawks had just two penalties for 25 yards.

Houston: The Cougars entered the season with hopes of making a New Year’s six bowl, but that accomplishment looks slim following consecutive losses to Texas Tech and Kansas, two Big 12 teams that Houston will face regularly next season when they join the conference. The loss snaps a streak of seven straight home openers the Cougars had won.

With 9:21 remaining in the second quarter, the game was delayed due to lightning. Play resumed after a 70-minute delay. Halftime was shortened to 15 minutes due to the delay.

Kansas hosts Duke next Saturday in an unexpected matchup of 3-0 teams.