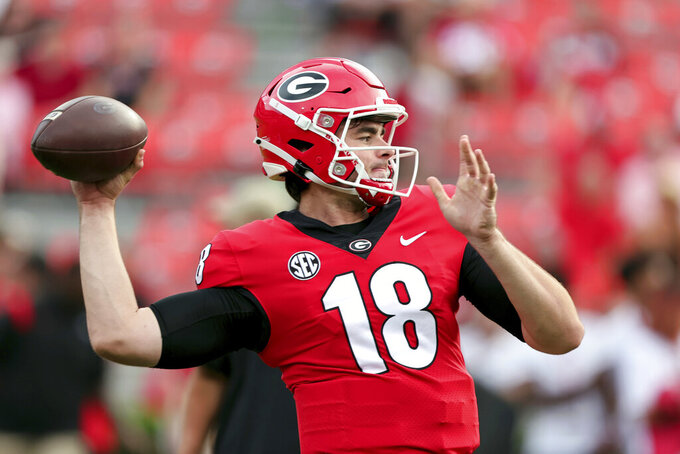 ATHENS, Ga. (AP) — So much for any debate about Georgia's starting quarterback.

JT Daniels has a firm grasp on the job.

Daniels returned from injury with three touchdown passes, backing up another stellar performance by Georgia's defense that carried the No. 2 Bulldogs to a 40-13 victory over South Carolina on Saturday night.

Daniels completed 23 of 31 for 303 yards, including scoring throws of 43 yards to Jermaine Burton, 38 yards to freshman Adonai Mitchell and 4 yards to James Cook.

“I definitely felt very confident,” said Daniels, who missed the previous game with an oblique injury.

Georgia (3-0, 1-0 Southeastern Conference) finally gave up a touchdown while on defense when Luke Doty, getting the ball on the Bulldogs' side of the field after a fumble, connected with Josh Vann on a 36-yard touchdown pass with 10:55 remaining.

“Of course, that upsets us,” said Georgia linebacker Nolan Smith, who had a huge night. “When we say no one in the end zone, that's what we mean."

With Doty playing for the first time this season, South Carolina (2-1, 0-1) gave up three sacks and a safety, along with two turnovers that led to Georgia touchdowns.

But the offense could take some satisfaction from being the first to score a touchdown on the Bulldogs. Until then, the only TD against Georgia had come on an interception return.

Daniels sat out a 56-7 victory over UAB, watching as backup Stetson Bennett tied a school record with five touchdown passes.

Daniels wasted no time re-establishing his hold on the No. 1 spot, completing a 21-yard pass to Brock Bowers on his very first snap and guiding the Bulldogs to the end zone on their first two possessions.

“Only one of us can play, and everybody is dying to be that guy," Daniels said. "Everybody in the room wants to play every game.”

Bennett got a shot the third time the Bulldogs had the ball. He promptly threw an interception that was returned to the Georgia 12, setting up a field goal.

Daniels returned to the game and didn't leave until early in the fourth quarter with the outcome no longer in doubt.

“We let the coach make the decision on who's going to play and when,” Daniels said. “I'm happy when Stetson plays great and he's happy when I play great.”

After punting the ball away in the closing seconds of the first half and content to settle for a 21-6 lead, Georgia wound up scoring five more points.

Backed up on their own 1, the Gamecocks explicably attempted to throw out of the end zone. Doty was sacked by Jordan Davis and Smith for a safety.

Then, after receiving the free kick, Daniels completed three passes for 39 yards to set up Jack Podlesny's 36-yard field goal as time expired, sending Georgia to the locker room up 26-6.

Georgia put it away in opening minute of the second half, again sparked by a huge defensive play.

Doty's pass was picked off by Derion Kendrick, who returned it to the South Carolina 20 to set up Zamir White's 5-yard touchdown run.

“They're not doing anything special on defense. They're just really good,” said South Carolina's Shane Beamer, who took his first loss as a head coach. “They line up and say, ‘We’re better than you. Come beat us.'"

South Carolina: Beamer definitely looked like a rookie head coach on that sequence near the end of the first half. With just 32 seconds left, there was no need for Doty to drop back to throw from the end zone against such a dominating defense.

Georgia: If there was any question about Daniels' status as the No. 1 quarterback — and there really shouldn't have been — that was put to rest by a performance that improved his record to 6-0 as the Bulldogs' starter.

South Carolina was dealt a couple of significant injuries early in the game.

Middle linebacker Sherrod Greene was carted off the field after taking an ugly blow to his lower right leg on the second play from scrimmage, a run by Georgia's White.

Beamer said Greene will be out for an extended period, though the injury may not be season-ending. Greene already went through than 2020, when he fractured his hip in the opener and missed the rest of the season.

Former graduate assistant Zeb Noland made his third straight start at quarterback, but he didn't last long either.

Doty, who missed the first two games while recovering from a foot sprain, went the rest of the way. Beamer said he didn't think Noland's hand was broken, but it was wrapped and he had no feeling in it.

With No. 1 Alabama holding on for a 31-29 win over Florida, Georgia could pick up some support for the top spot in The Associated Press poll. The Crimson Tide picked up 60 of 63 first-place votes a week ago, the other three going to the Bulldogs.

South Carolina: Travels to Kentucky next Saturday for its first SEC road game.

Georgia: Heads to Vanderbilt next Saturday for its first true road game of the season, though it may feel like home given the hefty red-and-black contingent that normally makes the trip to Nashville.