Defending champ LSU looks to bounce back on road at Vandy 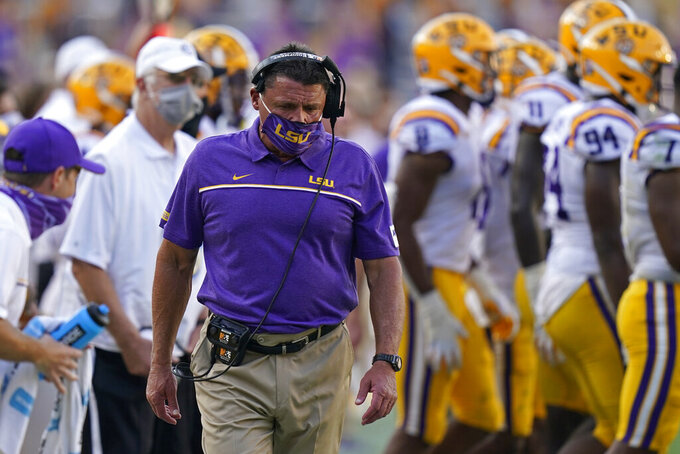 LSU needs a victory badly after the defending national champ lost its home opener. Vanderbilt missed a chance at a big upset on the road at Texas A&M, but the Commodores returned with a strong confidence boost after debuting a freshman quarterback in his first start along with a pair of new coordinators.

Vanderbilt: QB Ken Seals. The freshman now gets to throw against a LSU defensive backfield that allowed Mississippi State QB K.J. Costello to pass for an SEC record 623 yards last week. Seals threw for 150 yards in his collegiate debut.

LSU has won eight straight in the series and beat Vanderbilt 66-38 last season in Nashville. ... LSU is playing in Nashville in back-to-back seasons for only the second time ever and first since 1935-36. ... LSU held Mississippi State to just nine yards rushing in the opener. ... Vanderbilt was the last team to score on its opening possession against LSU. ... Vanderbilt coach Derek Mason is looking for his first win in an SEC home opener in his seventh season. ... Vanderbilt allowed 17 points to Texas A&M, the fewest points allowed by the Commodores to a top 10 team since holding then-No. 9 South Carolina to 17 points on Aug. 30, 2012.