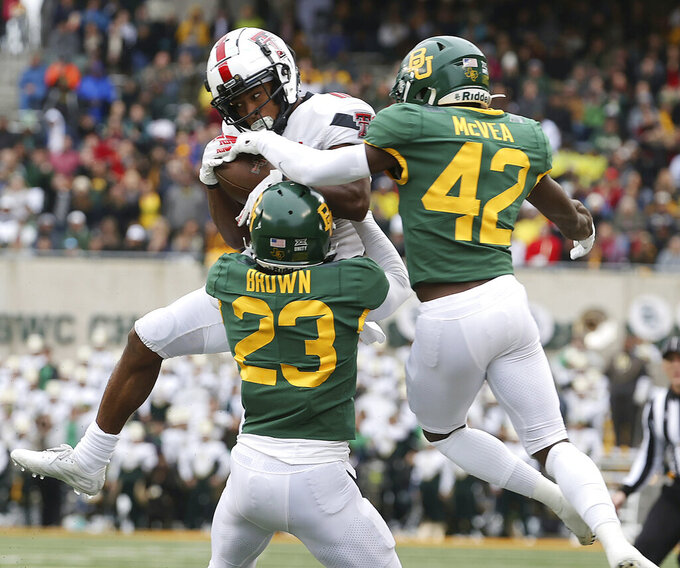 Often, the chatter heading into the Big 12 championship game focuses on dynamic offenses and a quarterback chasing the Heisman Trophy.

Oklahoma State’s defense is one of the nation’s best. The Cowboys rank third nationally in total defense, fifth in scoring defense, sixth in rushing defense and are the best at limiting third-down conversions. Fourth-year defensive coordinator Jim Knowles is a finalist for the Broyles Award, given to the nation’s top assistant coach.

“They all hung with me a few years ago when they might have thought I was being a little bit of a ‘not nice guy,’ let’s put it that way,” Knowles said after the Cowboys surrendered just 143 yards in a 55-3 win over Kansas earlier this season. “Not quite the words I used. But they hung in and they believed. And I just think now, you’re seeing the fruits of that.”

Oklahoma State’s defense did not allow a point in the second half of last Saturday’s 37-33 win over Oklahoma that ended the Sooners' run of Big 12 titles at six. The only points Oklahoma scored after the break were on a fumble recovery and a safety.

“I felt like we had settled down,” Knowles said. “We got the sense that our guys were starting to smell blood in the water, and they were playing fast. They were playing really fast. When you can play fast, you’ve got a chance to win.”

Oklahoma State freshman defensive end Collin Oliver has 12.5 tackles for loss and ranks third in the Big 12 with 9.5 sacks. He got the game-deciding sack against Oklahoma.

“It’s a good group top to bottom, and you know, as you watch them, you don’t just see like a ton of weaknesses on tape,” then-Oklahoma coach Lincoln Riley said as his team prepared for the Cowboys last week. “Like, they don’t have an area where you just point to and say, ‘That’s just killing them.’ They’ve got good, good playmakers at all levels.”

So does Baylor, which ranks 17th nationally in scoring defense, 19th in rushing defense and 12th in third-down conversion defense.

Baylor’s Jalen Pitre plays the STAR position, a hybrid of linebacker, safety and cornerback. He leads the Big 12 with 15.5 tackles for loss and three fumbles recovered. He also has forced three fumbles.

He was thrilled when coach Dave Aranda and defensive coordinator Ron Roberts presented the option of moving him from linebacker to a role that better highlights his versatility.

“I understood what the position entailed and what it demanded, and the different things that the position held,” Pitre said. “And so I’m thankful that they moved me to the position and it has been a great ride. He lets me, you know, be free. Lets me do a lot of things inside the defense."

Linebacker Terrel Bernard averages 6.9 tackles per game, though he was out with a knee injury when Oklahoma State beat Baylor 24-14 in the regular season.

“I think Terrel is one of those guys that when he’s just in the huddle and he’s in it, there’s just an added confidence that comes with,” Aranda said. “Because of his maturity and his resilience and his preparation, you just feel like he’s a coach on the field.”

Big 12 title games have averaged just over 56 points the past four years, but the over/under this year is 46.5, according to FanDuel Sportsbook -- a clear nod to those defenses.

Baylor is a slight underdog but expects to perform better than it did in that first game against the Cowboys. Oklahoma State ran for 219 yards that day and might have run away with that game if not for three interceptions.