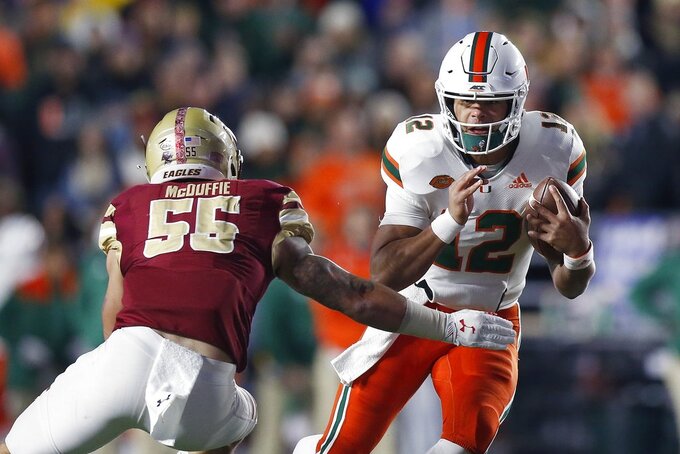 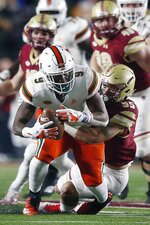 BOSTON (AP) — AJ Dillon needed one play to let everyone know he was back.

The Atlantic Coast Conference's preseason player of the year broke around the left end for 25 yards.

From there, Boston College was on its way to an emotional victory in its annual Red Bandana game.

Dillon carried it 32 times for 149 yards and a touchdown, Anthony Brown threw for a score and ran for another and BC beat Miami 27-14 on Friday night.

It was only BC's fourth victory in its last 22 meetings against Miami.

"He far exceeded our expectations today," BC coach Steve Addazio said of Dillon. "He gave us a great boost and was a catalyst today."

"The bandana game is a special game for us," Addazio said. "It's just a special atmosphere and a special game. How big is this game? We're at home, playing a great opponent and able to get our sixth win of the year.

"I think more importantly, for me, our team is playing with a great deal of confidence right now."

When it was over, the students stormed the field.

"Everybody's got some ownership in this thing," Hurricanes coach Mark Richt said. "All you can do is go back to the drawing board and the keep working hard and looking at the next opponent and get ready to play ball. That's all you can do at this point, but we're all disappointed."

They led 17-14 at halftime and made it 20-14 on Colton Lichtenberg's 23-yard field goal midway into the third after Hamp Cheevers' interception off a ball batted around deep in Miami territory.

Taj-Amir Torres picked off Rosier on the ensuing possession before Dillon ran 14 yards for his score on the next play, making it 27-14.

Sparked by Dillon's return from a left ankle injury that sidelined him for 2 ½ games and an amped-up, louder-than-normal crowd, the Eagles scored on their first two possessions. They marched 88 yards in 10 plays, taking a 7-0 lead when Brown hit Smith for a 9-yard TD.

Miami tied it on its first drive, when Darrell Langham caught a 13-yard score, before BC moved ahead 14-7 on Brown's 5-yard run.

Miami: The Hurricanes hardly look like a team that opened the season ranked eighth in the AP Top 25. They sputtered on offense and gave up big yardage plays defensively.

Boston College: The Eagles' offense looks so much more explosive with Dillon in the backfield, making them a much tougher matchup if he remains healthy.

It was the Eagles' annual game in memory of Welles Crowther, a former BC lacrosse player who was credited with saving dozens of lives in the South Tower of the World Trade Center during the terrorist attacks on Sept. 11, 2001 before he lost his life. He used his bandana- that he carried with him in his playing days at BC - to guard against the smoke and dust.

BC's players wore uniforms with bandana accents on their helmets, gloves, socks and cleats. His parents were on the field early in the second quarter.

The Eagles used two trick plays that led to the TDs on their initial two drives when QB-turned-receiver Smith completed two passes for 58 yards.

On the first drive, he hit Brown across the field for 27 yards. On the second, he went down the left sideline, connecting with running back Travis Levy for 31 yards.